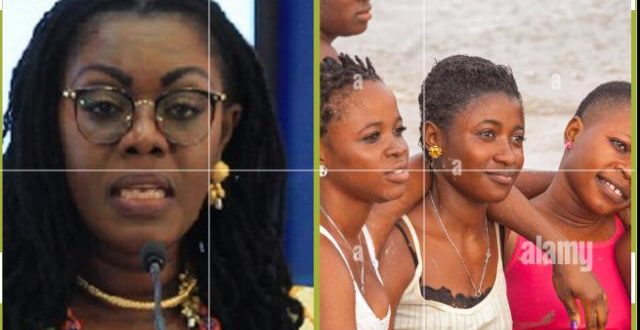 The Minister of Communications and Digitalisation, Mrs. Ursula Owusu-Ekuful, has cautioned the youth, particularly females against storing their nude photographs on mobile phones or any electronic devices.

She cautioned them to also desist from sharing such materials with anyone on social media as this could ruin their future.

Addressing the official opening of her ministry’s Girls In I.C.T (GIICT) project in the Bono region in Sunyani, Mrs. Owusu-Ekuful, notifies the beneficiaries of the project to focus on their education and shun such acts which could jeopardize their lives.

See also  Kumawu Bomeng: Sanaahene Tasked To Be In Peace And Harmony With His People.

One thousand female pupils and one hundred teachers drawn from all the 12 districts in the Bono region are being taken through an ICT training related programmes.

A Student from Banda Islamic School in the Banda District of the Bono Region emerged the Best In Girls in ICT competition held in the region.

Fourteen years old Hawao Omoro beat 99 other students to become as the overall best in the regional competition which was keenly contested among the participating schools in the 12 Districts of the region.

Hawau Omoro took home a 3,000 cedis price, a laptop and the establishment of a computer laboratory for her school and some other personal rewards from the minister of communications and Digitalization.

She urged girls to take ICT related programmes seriously after she spoked with Nana Asempa Asa of SpaceFM in Sunyani.

She urged the Minister of communication and Digitalization to continued her efforts to engage more girls in the programme.

The Banda District Chief Executive Hon. Emmanuel Akone who initially underrated his participating team encouraged his students especially girls in the area to aspire for gold.

He said the competition has made him believe that irrespective of your location it’s all about your ability and strength to aspire higher.