Breaking News
Home / GENERAL NEWS / “unlike Ghana, I never paid money to get enlisted in the US Army” ~ Ghanaian-US based Soldier 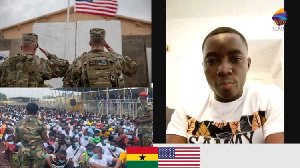 “unlike Ghana, I never paid money to get enlisted in the US Army” ~ Ghanaian-US based Soldier

Samuel Kusi, a Ghanaian soldier serving in the US, revealed that his enthusiasm for the military drove him to migrate. Due to his lack of “connections,” he was unable to enlist in the Ghanaian Armed Forces.

Samuel said that compared to Ghana, the US Army application procedure was the simplest on Daily Hustle Worldwide on SVTV Africa. He disclosed that he made no payments and that he did not require a working connection to communicate.

“I wanted to join the military in Ghana, but as you know, it is all about ‘whom you know.’ If you don’t know anyone, it is tough to get through, so I gave it up to become a teacher. I had an interest in it, but if you don’t have money, no one cares,” he said.

According to Samuel, he got the opportunity to travel to America through their visa lottery program and left Ghana in 2017. Samuel added that he worked for a while when he got to the US before joining the army.

“I worked as a flight ticketing agent and a barista at Star Bucks for seven months. Eventually, I met a Ghanaian military recruiter who helped me with the process. You don’t need to buy forms or pay anybody to join. The recruiter picked me up from my house to her office and explained the benefits and everything else.

“Why is it so hard to get into the Ghana Army? They will sell 5000 forms and pick just 500 people, and 300 of them used protocol. In the US, you don’t queue, but they will pick you up and drop you off after,” he explained.

Samuel mentioned some of the benefits of joining the US army; educational benefits, free accommodation, and feeding choose to work full time or as a reserve.