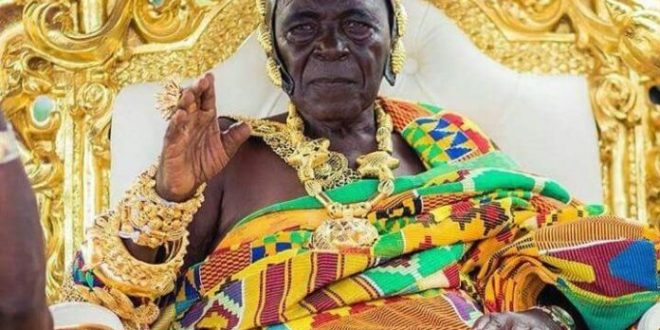 Chief of Kwahu-Obo in the Kwahu South District of the Eastern region, Osabarima Yeboah Afari-Buagyan II has hinted that he has had a revelation concerning the 2024 general elections but will disclose it at the right time.

Even though he could not state emphatically the content of the dream he had, the traditional leader stated that he will soon come out openly to speak to the matter.

Welcoming President Akufo-Addo to his Palace on Tuesday afternoon as part of his Eastern Regional tour, Osabarima Afari-Buagyan commended the President and the NPP government for the numerous developmental projects initiated within the district and the region at large.

He, however, appealed to the President to help provide the community with a Police station to help deal with crime as the current office for the police is being rented.

Meanwhile, President Akufo-Addo in his response assured him he will speak with the Inspector General of Police and the security apparatus after his tour to deal with the issue as soon as possible.

He was also grateful to the people of Kwahu for voting massively for the NPP in the December 2020 general elections to clinch victory for the party.