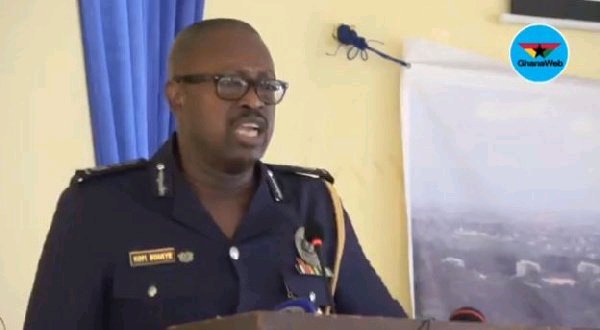 COP Kofi Boakye has raised concerns about Ghanaians tagging Police officers as corrupt because some of them, particularly those stationed on the roads, tend to collect kickbacks.

A video which has surfaced on social media and sighted by Peacefmonline.com captures the Director-General in charge of Legal and Prosecution for the Ghana Police Service, COP Kofi Boakye, in an interview with seasoned Journalist Kwesi Pratt, seemingly defending the Police.

According to him, corruption is not peculiar to the Police Service but a general trait of every Ghanaian.

Defining corruption as an inherent syndrome in Ghanaian society, COP Kofi Boakye wondered why the Police are the ones mostly at the receiving end whenever issues of corruption are broached.

” . . if, now, we go and interview people at the harbour alone, they will have who is more corrupt there. When we go and interview teachers or people who want to be admitted [in] JSS, you will know who is more corrupt. But you know [Police], among all the works, Police, we’re the interface between the law and the public. Is that right? And they see us more; Policemen are always on the road and even the Police corruption they’re talking about, it’s only on the roads . . . which we have accepted that it’s bad. But who gives them the money?”

He further stated emphatically that the cultural system of Ghana endorses corruption, perhaps that is why every Ghanaian exhibits some corrupt tendencies.

He said, “traditionally, culturally, our system endorses corruption. Look at all our proverbs”, ”therefore, we have to look at our own culture. So saying that Police is corrupt is so easy”.