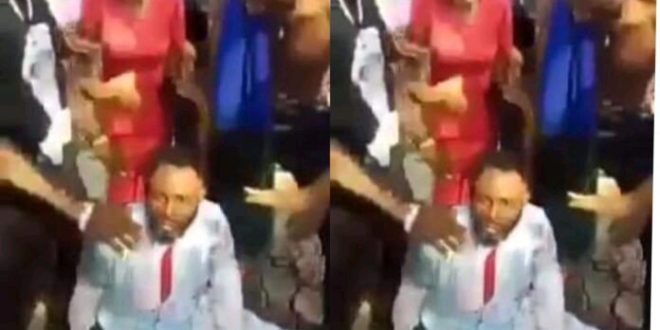 “I’m tired” Pastor attempt to commit suicide, says his church has only 15 members

A Nigerian pastor of a pentecostal church reportedly attempted to take his own life over frustration from her ministry.

It was gathered that the yet-to-be-identified preacher was trying to hang himself in a tree with a rope at Ben Wosley, Ada George, Port Harcourt, Rivers State but he was intercepted by some residents of the community after an alarm was raised.

The rescuers, together with some policemen, untied the rope from his neck and poured water on him until he regained consciousness.

After regaining his consciousness, he was lamented of having only 15 members in his church since 2000 despite doing everything on his part to make his ministry grow.

Narrating what led to his action, he said:

Speaking further, he said: “My colleagues that we went to church school together, they’re doing well, their church have grown, they’re travelling abroad while mine is not growing. I will host crusade, I will not even see money to settle the debts incurred. I have done everything. I cannot even pay my house rent”

Meanwhile, music producer, Champagne Beatz revealed that he conducted a DNA test to confirm the paternity status of the kids and results indicated that he is not the biological father of his 3 kids, whose names he revealed as Richard, Favour, and Donald.

See also  Entrepreneurship Is The Solution To Unemployment In Ghana- Dr. Richard Asiedu

According to him, it was a shocking discovery he made and Champagne Beatz added that if anything happens to him, Yemi Adebowale should be held responsible. 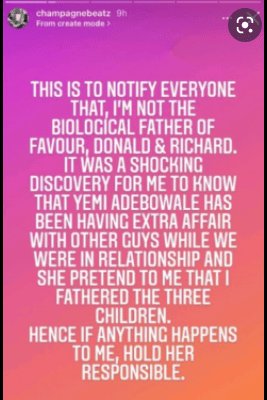 Previous Two policemen involved in bullion an robberies killed after inter-led raid at Borteyman
Next Deputy Speakers of Parliament can vote – Supreme Court.