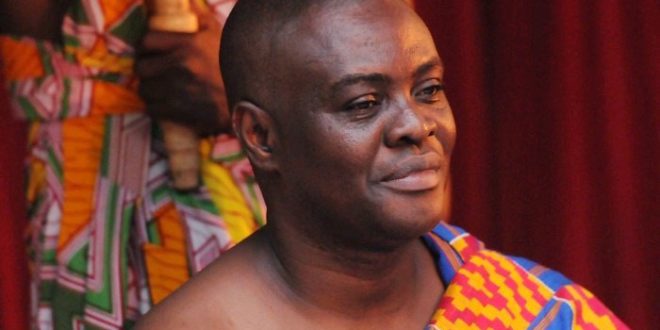 Dormaahene Osagyefo Oseadeyo Agyeman Badu has dispelled claims suggesting that he has an affiliation to the National Democratic Congress (NDC).

Osagyefo Oseadeyo Agyeman Badu has over the years been linked with the NDC because of some utterances from him in the past mostly criticizing the New Patriotic Party(NPP) government.

But speaking to some members of Dormaa after a cleanup exercise, the Chief indicated that he has no party affiliation.

He considers himself as a member of the “Dormaa Party” and will continue to advocate for development for his people.

To him, he will throw his weight behind any government that will do right in the eyes of his people and continue to be critical towards some decisions governments take in Ghana because there is the need for the country to develop.

“I will continue to be critical of every government because they come here to campaign and make promises so if they are not delivering, I will say it. Sometimes they say I belong this this party and that party but I have only one vote and I can’t force my people on who they should vote for, I will never do that.