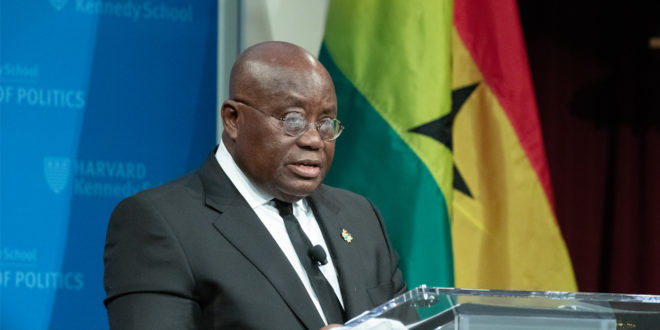 “Your threat to vote against NPP never moved me” ~ Nana Addo

President Nana Addo Dankwa Akuffo-Addo has cautioned that he is not moved by threats of electoral consequences by some supporters of the New Patriotic Party, NPP.

He is of the view that not everyone will vote for a particular candidate in an election and that it voters can also not be forced to make choices in a democratic dispensation hence there was no need to threaten a government with votes.

Akufo-Addo was responding to concerns raised by people in Manso and Kwabre, who according to an OTEC FM journalist had threatened to vote out he NPP in 2024 if their roads are not fixed.

See also  fear engulfs ghanaians following the dead of a policeman escorting bullion van and a woman at shop.

The journalist was hosting the President in an exclusive interview as part of his official visit to the Ashanti Region where he has inspected and launched a number of projects.

“The people of Kwabre and Manso, we know they voted massively for Nana, they have asked me to inform the president that if their roads are not fixed, they will be pained and in 2024, they will vote against the NPP,” the journalist said after the Roads Minister Kwasi Amoako-Attah had responded to a question.

The president quickly weighed in with a response: “No problem, no problem.” He continued: “I am saying people make those kinds of threat, me, they don’t frighten me. Somebody votes for you, somebody supports you, it is because they want you to do things for them, so I understand that.

“There is no need for people to say if I do not do it, this or that. That is your own problem. Of course, I will fulfil my promises.

“But if it so happens that you decide to vote for the NDC, that is your problem, that is not mine. Nobody will hold your hand to thumbprint for any candidate, the most important thing is that I understand the responsibility and we will deal with it,” he stressed.

Previous “I Don’t Care If You Vote For NDC In General Election, It’s Your Choice” ~ Akufo-Addo [AUDIO]
Next Government’s Response To Onua Tv’s Publication Nana Addo Is Actively Involved In Galamsey