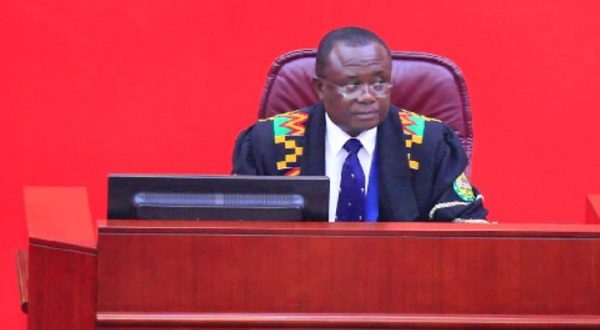 Supreme Court to rules on Deputy Speaker’s right to vote in Parliament, March 9

The contentious issue of whether a Deputy Speaker of Parliament presiding over proceedings can vote or should be counted as part of the quorum will be decided by the Supreme Court on March 9, this year.

A seven-member panel of the apex court will give certainty to the issue when it delivers a judgement on a suit challenging the constitutionality of the First Deputy Speaker, Mr Joseph Osei-Owusu, in counting himself as an MP when he presided over the passage of the 2022 budget on November 30, 2021.

The action by Mr Osei-Owusu in counting himself as an MP enabled the Majority in Parliament to form the right quorum under Article 104(1) in order to pass the budget.

A lawyer and law lecturer, Justice Abdullai, who filed the suit, is asking the Supreme Court to interpret Articles 102 and 104 of the 1992 Constitution and declare the action of Mr Osei Owusu as unconstitutional.

He also wants the Supreme Court to declare the whole proceedings in Parliament on November 30, 2021 which led to passage of the 2022 budget as unconstitutional.

However, the Attorney-General (A-G), Mr Godfred Yeboah Dame, in a defence on behalf of the state, argues that there is no express provision in the 1992 Constitution that stops a Deputy Speaker presiding over proceedings from voting or counting himself as part of MPs present in order to form the right quorum.

The plaintiff is of the view that the 1992 Constitution does not allow a person presiding over proceedings in Parliament to have an original or casting vote, or to be part of a quorum.

He also cites Article 104 (2) of the 1992 Constitution which stipulates that: “The Speaker shall have neither original nor casting vote.”

It is the case of Mr Abdulai that the First or Second Deputy Speakers of Parliament, when presiding, have the “same authority and mandate just like the Right Honourable Speaker”, and therefore cannot vote or be part of the quorum.

It is the case of Mr Dame that the quorum under Article 102 is for the conduct of business in Parliament, and that is why Article 102 provides that it should be one-third of members.

“Given that Parliament presently is made up of 275 members, the quorum under Article 102 for the conduct of its business is 92 MPs,” the A-G submitted.

According to the A-G, based on the clear provision of Article 102, any person presiding, either the Speaker or Deputy Speakers, is precluded from being part of that quorum.

On the other hand, the A-G is of the view that the quorum under Article 104 (1) which deals with the determination of matters through voting in Parliament requires at least half of all MPs, and such a quorum is not the same as the one in Article 102.

Mr Dame contends that unlike Article 102 which precludes a “person presiding” from being part of the quorum, Article 104 (2) specifically precludes “The Speaker”.

The A-G, therefore, holds the position that only the person elected as “The Speaker” of Parliament is barred from forming part of the quorum under Article 104 when presiding, and not Deputy Speakers who preside over proceedings.

Previous SHOCKING: Rev.Obofour Sits On A Customized Snake-Lion like Thrown To Show He Is A Great Chief- [watch video].
Next ‘Private vehicle does not require roadworthiness certificate’ – Justice Monica Dongban-Mensem