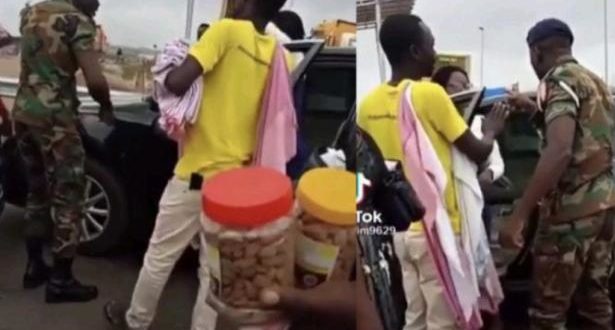 Violence everywhere, a brave woman has given a Soldier man a tough time after the soldier man seized her driving license. The main reason leading to the Soldier man seizing her license is yet to be known.

In the viral video, the soldier man was seen exchanging words with the woman and the woman claimed her husband is also a soldier so he has no right to treat her like seizing her license.

The Soldier insisted on doing the right by seizing her License so she should follow her to the Police Station.

This video was captured in the Tema roundabout adjacent to the Motorway. He is believed to be a Michel Camp Soldier.

Previous God why are You so wicked to Me, Woman cries out after losing Her entire Family
Next Edition: NPP Breaking the “8” is Feasible- Hon APC writes.