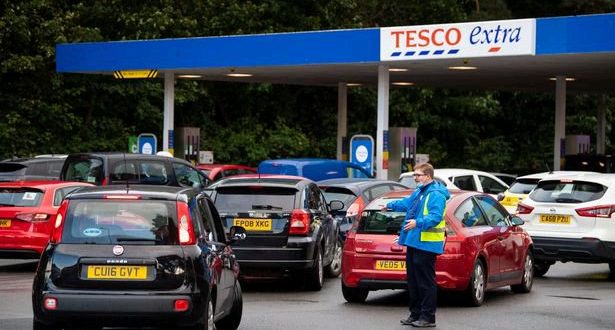 Military To Start Deliveriy Fuel Across The Country From Monday.

Queues at the Tesco petrol station off Western Avenue in Cardiff in recent days
The military will start delivering fuel across the country from Monday, the UK Government has announced.

Almost 200 military tanker personnel, 100 of which are drivers, will be deployed to provide temporary support as supply issues continue.

For days drivers across the country have faced rising prices and long queues at forecourts. Petrol shortages are expected to carry on for another week ‘or so’ according to a policing minister, and experts have warned of a “pretty bleak” few weeks ahead for drivers with prices expected to soar.

On Friday evening, it was announced that military personnel are currently undertaking training at haulier sites across the country and from Monday will be on the road delivering fuel supplies.

The UK Government said demand for fuel “has stabilised throughout the week” and that more fuel is now being delivered than is being sold but added some parts of the country “still face challenges”.

What do you make of the fuel shortages? Let us know in the comments below

Defence Secretary Ben Wallace said: “Across the weekend over 200 military personnel will have been mobilised as part of Operation Escalin.

See also  Ejura: There would have been more death– Brigadier General.

“While the situation is stabilising, our Armed Forces are there to fill in any critical vacancies and help keep the country on the move by supporting the industry to deliver fuel to forecourts.”

The crisis began following an announcement from BP that it was closing a number of petrol stations. The closure was largely attributed to a national shortage in HGV drivers, a Europe-wide problem made worse in the UK by Brexit, as many foreign drivers could no longer work here.

A new temporary visa scheme has since been introduced by the Government to help encourage European lorry drivers to work in the UK, but leading industry experts have criticised the plan, describing it to have “very little benefit”.

Business Secretary Kwasi Kwarteng said: “Thanks to the immense efforts of industry over the past week, we are seeing continued signs that the situation at the pumps is slowly improving. UK forecourt stock levels are trending up, deliveries of fuel to forecourts are above normal levels, and fuel demand is stabilising.

“It’s important to stress there is no national shortage of fuel in the UK, and people should continue to buy fuel as normal. The sooner we return to our normal buying habits, the sooner we can return to normal.”