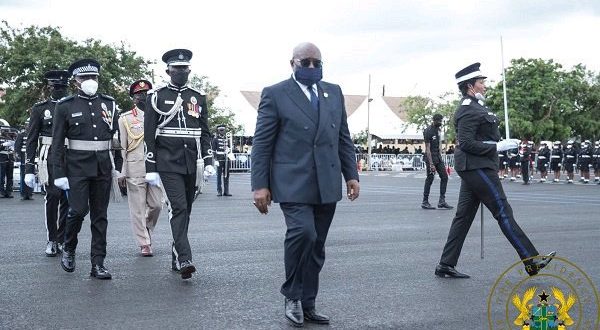 President Akufo-Addo has given assurances over safety concerns

• Over the past few weeks, criminals have carriedmeting out various attacks on citizens

President Nana Addo Dankwa Akufo-Addo has assured citizens of the security services resolve to dealing with the rising spate of violent crimes in the country.

His comments come following an increase bank-related robberies and violent crimes occurring in parts of the country.

Speaking at the 50th graduation ceremony of cadet officers’ course in Accra, the president said the Police and security services were determined to put an end to all threats posed by criminals.

“I’m aware the recent incidents of violent crimes in some parts of the country have generated safety and security concerns from several sections of the populace. I want to assure Ghanaians that the Police Service and indeed all the other security services are determined to deal decisively with the threats posed by dangerous criminals and criminal syndicates,” he said.

Over the past few weeks, some heavily armed persons have been carrying out various attacks on persons who may have transacted business at a bank.

This has heightened the level of insecurity in the country despite the police already making some arrests.

Previous Military To Start Deliveriy Fuel Across The Country From Monday.
Next Let’s unite to develop our constituency – James Gyakye Quayson to NPP members*