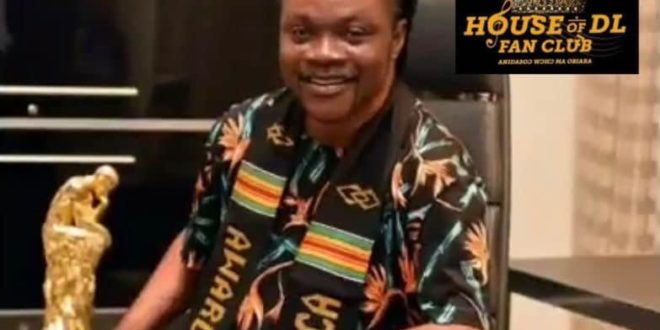 DADDY LUMBA
He was born as Charles Kwabena Fosu aka Charles Kojo Fosu Aka Daddy Lumba in Nsuta, near Mampong, in the Ashanti Region of Ghana on the 29th of September 1964 to Comfort Ama Saah and Charles Kojo Fosu Snr, both were teachers.

In the early 1980s, he debuted on the highlife scene with his massive hit “Yeeye Aka Akwantuo Mu” with Nana Acheampong (known together as the “Lumba Brothers”).

This song depicted the number of Ghanaian immigrants that originally leave the country to seek better fortunes abroad but make those temporary homes permanent due to financial, emotional, or other unforeseen hardships.

Yereye Aka Akwantuo Mu was with his colleague Nana Acheampong under the name Lumba Brothers spawned several hits and established Daddy Lumba as a versatile and highly gifted musician.

Lumba’s wife, Akosua Serwa, produced the album.
He has been consistent with the release of multiple-hit albums since then and has established himself as one of Ghana’s most popular singers of his genre, Highlife.

He introduced a future love song master, Ofori Amponsah, through his blockbuster hit album Wo Ho Kyere (1999). Daddy Lumba’s pairing in 1999 with the rising star produced five hits and shot Ofori Amponsah into the limelight.

Altogether he has sprung the careers of 13 different Ghanaian musicians.
Another collaborative effort was Ahenfo Kyinye(2004) with Pat Thomas.

Lumba proved that he is still a force to reckon with when he scored several nominations in the 2008 Ghana Music Awards with his album Tokrom. In all he has 22 albums that he wrote and produced.

See also  Afrobarometer & Global Info Analytics Reports Only Confirms the Sufferings of Global Economies and its Impact on Ghanaians; Nothing New Under the Sun: Razak Kojo Opoku Writes

Altogether he has released more than 27 albums as a songwriter, or singer or producer or all three including his 25th album, Sika, in December 2008. His last release was 2016’s “Enko den”.

In 1999, he won three awards including Best Album, Artist of the Year and the Most popular Song of the Year at the Ghana Music Awards. Before the year 2002, Daddy came out every year with a hit album.

His solo career has not been short of controversy; one moment he would release a gospel album and the next he would shock people with his provocative lyrics and music videos.

He owns his own studio where he does all his work and also owns machines for mastering, cassette duplication, loading, printing and shrink wrapping exclusively for his works.

His music has evolved over the years to reflect the changes in taste and demands for music; he can currently be described as a contemporary highlife artist.

Daddy Lumba has won several Ghana Music Awards and other excellence awards and continue to appeal to the young and old.

In 2014, He released his “Awoso” album that included the hit “Nea Woho Beto Wo” that won him worldwide praise.

The song which fans have given it a new title of “Yentie obia” has become an instant hit and won Daddy Lumba Highlife Artist of the Year and Highlife Song of the Year at the 2015 Vodafone Music Awards.

In 2015 he released a gospel single with his longtime partner Nana Acheampong from the original Lumba Brothers titled “Afihyie Boa”.