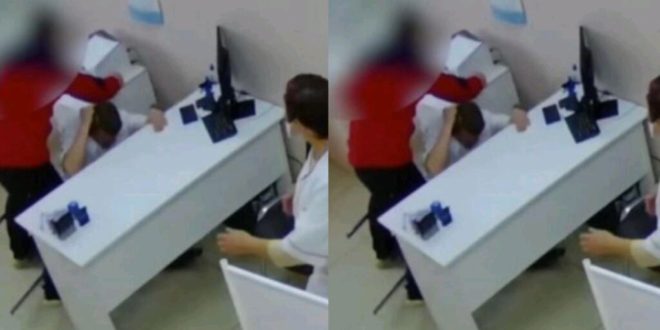 In The News: Jealous Husband Storms Hospital, Beat Up Dermatologist for Gushing Over His wife Skin. WATCH VIDEO

Jealous husband storms hospital and beats up a dermatologist for telling his wife that her skin is “beautiful”.

Now the video that is going viral right now is mind-rending. The video is from Nizhnevartovsk, Siberia which is currently going viral on social media.

Jealous husband storms hospital and beats
According to reports, the doctor simply asked the hijab-wearing Muslim woman to show him her elbows, stomach and back and he did not ask her to ʋŋdress.

After checking her, he told her that there were no problems, adding “the skin is beautiful”.

The woman then went back to complain to her husband that the medical examination breached “Muslim law”.

The man who was unhappy with a dermatologist for passing a compliment about his wife’s skin stormed the hospital and beat up the doctor.

The dermatologist, Vladimir Zhirnokleev was diagnosed with a head injury, concussion and bruising after the unexpected assault.