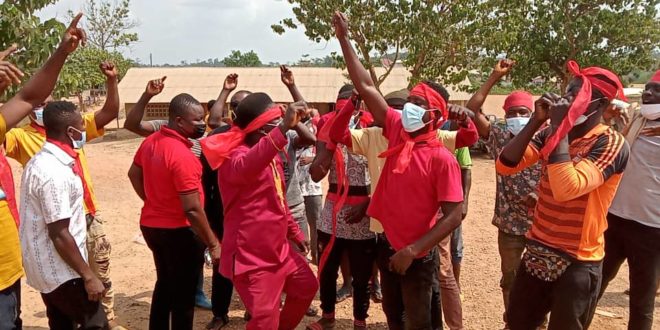 New Patriotic Party NPP, Youth Caucus in the Sekyere Kumawu District of Ashanti has lambasted the District Chief Executive, Hon Samuel Addai Agyekum for his barbaric, fallacies and his fake and lies of projects and development according to him he has executed or brought up to the District.

According to the disgruntled group, the state of the principal streets of the district capital, Kumawu, the historic Bodomase market, the armed robbers threatened traders were unbelievable and unbearable.

They are worrying over why the media allowing the non performing, faild DCE to continue trumpeting fakes and lies to the public without them coming to observe the reality on the grounds for themselves.

In a press release on Monday the group described the Chief Executive recent comments on radio as hoax which they said it is rather deepening their already inflicted wounds.

Dazed by revelations of his pro-opposition acts that cost the ruling New Patriotic Party (NPP) unprecedented number of votes in the December 07, 2020 general elections, district chief executive (DCE) for Sekyere Kumawu in Ashanti region of Ghana, Samuel Addai Agyekum, has further irritated the good people of the NPP stronghold with his trumpeting of nonexistent completed projects.

With 95% of the assembly’s share of the District Assembly Common Fund going to the office of the DCE, the discerning masses in the district feel disappointed by the eyesore state of the principal streets of the district capital, Kumawu, the historic Bodomase market, the armed robbers threatened traders, and the various electoral areas that have kept faith with the NPP from time immemorial.

“So can’t the media houses hosting him to trumpet lies come and see the reality on the ground? So who awarded this disloyal DCE as we saw in a newspaper?

My goodness! What do you want to tell an over sixty-year market woman who was raped on the road by an armed robber where as DCE Agyekum dismisses our heartbreaking accounts?

See also  Did we campaign, vote for you online, why police, other security Recruitment online- aggrieved NPP footsoldiers

Why do we have an enemy within this DCE? What have we done to deserve these, Nana Addo? Please, put your eyes and ears on the ground before the district deteriorates? Journalists, come again on Friday to see the plight of market women who have rallied behind the NPP candidates to retain power,” dejected traders to the media Sunday afternoon.