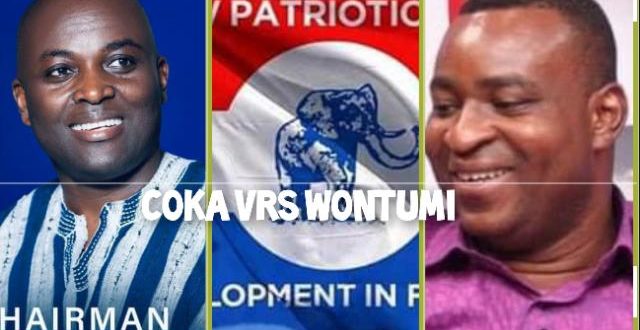 Head To Head
Ashanti Regional Chairmanship Race COKA VRS WONTUMI. WHO IS WHO?

As the New patriotic party is set to go for regional delegates conference, the Ashanti regional competition is increasingly becoming tough particularly in the Chairmanship portfolio among the current Mr Bernard Antwi Boasiako aka chairman Wontumi and Odeneho Kwakwu Appiah aka COKA who was the constituency chairman for Afigya Kwabre South.

A voice from afar by one of the leading members of the party, Dr Adubofour has enumerated some difference between the two.

Chairman Odeneho Kwakwu Appiah COKA.
1. A popular and experienced politician whose records in NPP dates back to 1992.

Due to his enormous experience he is a Board member of ECG and also management member of the National Under 17 football team.

1. WONTUMI
A popular Ghanaian politician of NPP and Chairman of Ashanti Region.

He recently expressed interest and put in the bid to buy Chelsea Football club in the U. K.

5. COKA
Net Worth:
Owns lots of houses and hotels across the country and abroad.

5. WONTUMI
Owns lots of houses in the country.

COKA
Political:
i. He has been a Polling Station Executive before.

ii. He has been an Assemblyman before.

He has been a regional Treasurer of the NPP before

iii. Has become a Constituency Chairman for close to 20 years

iv. Has become the Chairman of Chairmen for 2 consecutive times

v. Was able to establish NPP Offices in all the Electoral Areas of Afigya Kwabre South.

vi. Was able to establish a Welfare Fund for Afigya Kwabre South Constituency.

WONTUMI
Political:
i. Has never worked in the lower ranks of the party such as Polling Station before.

ii. He was a Constituency Chairman of Bosomtwi for only one term.

ii. He is wealthy but remains very cool and modest.

iii. He is very creative, strategic and a goal getter.

iv. He is a phyllanthropist and ready to spend on good cause of human endeavors.

v. He is affable and very easy to move with

vi. He is an orator, extempore and concise with words.

He has gone through the mill, tried and tested

ii. He is wealthy and loud.

iii. He struggles with uncertainty to get to his goal.

See also  NPP has always chosen flagbearers based on seniority

iv. He splashes money on his fanatics and people around him.

v. He speaks with emphasis on Bible quotations which sometimes may differ from the text under consideration.

vi. Many see him as the main cause for the NPP’s abismal performance in Ashanti. They describe him as a braggat who speaks without measure.

vii. Again they accuse him of show of opulence. Most Ashantis are angry with him for showing gold on the TV even at the time when the president was seriously fighting Galamsey.

COKER
Impact on NDC
i. He is seen by the NDC as the strategist for NPP’s success in 2016 and 2020 General elections.

ii. The NDC mentioned him in their press conference both in 2016 and 2020 by Asiedu Nketia and Elvis Afriyie Ankrah respectively as the man who masterminded all the stragies to outwit NDC in Ashanti Region.

iii. He is seen as a big threat to the NDC should he assume the seat as the Regional Chairman.

iv. To the NDC, they wish COKA does not win because it will be a very big set back to their progress in Ashanti.

WONTUMI
Impact on NDC
i. The NDC sees him as a violent person who uses force in his activities and for that matter are not afraid of him since they are prepared to face him in equal measure.

ii. The NDC believes, a win for Wontumi is a sign of good omen for them because they have studied and know all his strategies.

iii. The NDC sees him as a person who barks but lacks the capacity to bite, hence are not afraid him one bit.

iii. NDC regards Wontumi as a person who gives false hopes and lacks the capacity to fulfill it. They set agenda 47/47 as a clear example. That they mapped out a strategy to outwit him. They were able to take back all their seats and pushed one to an independent candidate.

iv. The NDC says they will be very happy if Wontumi wins because they are sure to widen their gains and take additional seats.

GENERAL OBSERVATION
Odeneho(COKA) is a team player who is determined to use experience and strategic approaches to increase the votes of Ashanti.

Ashanti and for that matter the NPP nationwide should decide whether they want a goal getter who can easily break the 8 or they want a person who will use rowdism which the NDC is already accustomed to, and are prepared to increase their votes in Ashanti should the latter still remain as Chairman.

To break the 8 is not sheer populism and a one man show affair but a collective responsibility with high level strategy from a good leader to unite the front to victory.

If indeed, NPP is poised to break the 8, then the national party should bring their attention to their world bank to elect the right person for the job come 2024.

By: Dr. Adubofuor
(Voice from afar)