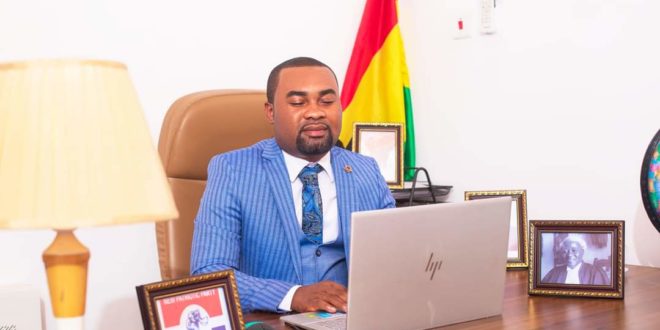 Mr. Kofi Bentil IMANI is behaving a like a spoiled child who wants his parents to provide all the good things of life that would make him feel better and more comfortable but cares less about how his parents struggle to generate the income(revenue) for his comfort in the midst of family crisis.

Some of the signs of a spoiled child include:

1. Never satisfied with what they have.
2. Think the world revolves around them.
3. Use tantrums and whining to get his way.

Mr. Kofi Bentil recently had made some pronouncements which are spoiled Child-like including:
1. Misuse of taxes and debts.
2. The economy is in a mess.
3. Our leaders have spent future earnings and taxes.
4. We are sinking in debt.
5. What they have to do is find ways to fix the mess,not do more of the same!
6. The grand robbery called Agyapa is still being cooked. Every bandit will be resisted.

Responding to the tantrums and whining of Mr. Kofi Bentil.

1. President Akufo-Addo’s Government has NOT misused the taxes collected. There are numerous evidence-based policies, programmes and projects being implemented by Akufo-Addo Government with the taxpayers’ monies.

With regard to debts, can Mr. Kofi Bentil help us with any Country without debts currently? Is there any debt-free Country?.

2. Yes, just like North America, South America, Asia, Europe and the rest of the World are facing global economic mess largely due to COVID-19 and Russia-Ukraine War, Ghana is not an exception as far as the mess of its economy is concerned.

However, Mr. Kofi Bentil should try and appreciate the fact that, regardless of the mess of the Ghanaian economy, the Government has stood on its grounds without running back to IMF for economic bailout.

Yes, the economy is in a mess but Kofi Bentil has been receiving regular supply of energy for his day-to-day activities. There is no permanent Dumsor unlike previous Government of Mahama.

The economy is in a mess but Government has NOT cancelled any of its flagship policies, programmes and projects. They are still ongoing together with massive roads construction and infrastructure projects under the economic mess of the Country.

3. Akufo-Addo’s Government has NOT spent the Country’s future earnings and taxes on Chichinga.

What is the sense in keeping money and taxes for the future while looking on for a messy economy to deteriorate further at the detriment of the future generations?.

President Akufo-Addo is using the earnings and taxes to secure the future of the youth through providing quality education under Free SHS & Free TVET Policies, providing Jobs for them under 1D1F, NABCO, NEIP, GEA, NAELP etc.

4. it is NOT true that we are sinking in debt. In fact, there is no Country without debts.

Yes, Ghana has debts but it is also factual to state that Ghana’s Debt-to-GDP Ratio has reduced down to 76.6% on improved economic growth figures better than what IMF forecasted.

Ghana’s debt is still within the threshold, therefore it is wrong for Mr. Kofi Bentil to conclude that we are sinking in debt. Our debt portfolio is being managed prudently by Akufo-Addo’s Government.

5. It is true that Government has to find ways to fix the mess and not do more of the same.

President Akufo-Addo’s Government has taken a number of pragmatic steps to reduce waste in the public financial management in order to meet the budget deficit for the year 2022. These measures were announced by Hon. Ken Ofori-Atta, the Minister of Finance including cutting down the expenditure of the Government, increasing domestic revenue mobilization through the E-levy in order to free Ghana from the direct controls of IMF and World Bank.

See also  The Currency And Economy Of Every Country Is Under Pressure: Razak Kojo Opoku Writes.

President Akufo-Addo’s Government is certainly doing something right and good in the face of global economic crisis largely attributed to global COVID-19 and global political tension between the West, Russia and China.

6. It will be out of ignorance and mischief for anyone to conclude that, Agyapa deal is a grand robbery. Such people perhaps need to seek proper briefing, education and knowledge about Agyapa deal from the Minerals Income Investment Fund(MIIF).

The decision by the Minerals Income Investment Fund(MIIF) to list 49% of the Agyapa Royalties on London Stock Exchange and the Ghana Stock Exchange with the patriotic objective of raising between $450 million and $700 million in support of the national economy of Ghana in sectors such as infrastructure, Roads Construction and other social amenities especially in the mining communities is a completely excellent decision that requires full support of all Ghanaians.

The Government needs revenue from all angles leveraging on the domestic resource potentials of the Country instead of running back to IMF.