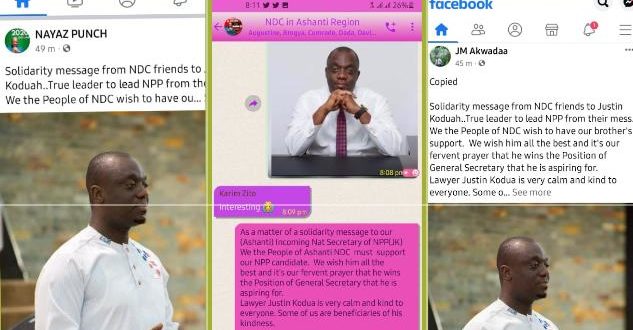 Since when did NDC see Justin Kodua as competent to be the General Secretary of New Patriotic Party? Their sudden support for Justin Kodua clearly shows that John Boadu has been a thorn in their flesh.

Is it not surprising that Kwasi Pratt Jnr and Kevin Taylor who have been against NPP have openly declared their intention against John Boadu?

In as much as we thought it was enough, Poku 1 TV, a blogger has intercepted a video about some well-known NDC Party Executives in Ashanti Region throwing their support for Justin Kodua.

As if these were enough, about 80% major NDC Social Media Platforms like facebook, Whatsapp and others have been campaigning and endorsing Justin Kodua Frimpong as their favourite General Secretary. 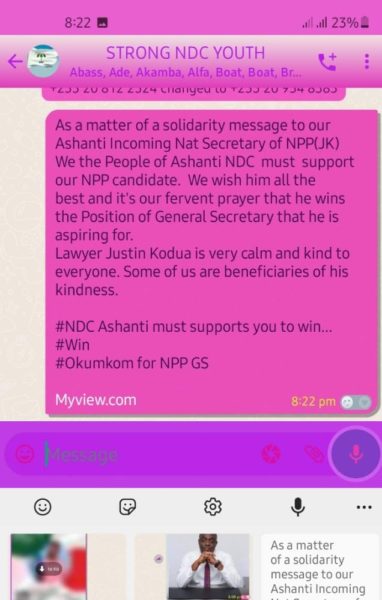 What weakness has NDC identified with Justin Kodua that they are doing all they can to help him win over the experienced John Boadu?

What interest do these people have in NPP internal elections? Discerning People should analyze! It is clear, they will be comfortable to do “their things” with soft- nature person like Justin Kodua.

They think with JFK, they have no problem crashing down NPP. They have realized that the only way they can seize power from NPP is to truncate the brain behind the NPP Pink Sheet Tracking System.

To the Tried, Tested and Experienced John Boadu, never lose hope! When all seems to be against you, remember, a ship sometimes has to sail against the current, not with it.

Also remember, a rose does not answer its enemies with words, but with beauty. The NPP Delegates shall never be ungrateful to your service for the progress of the Party. 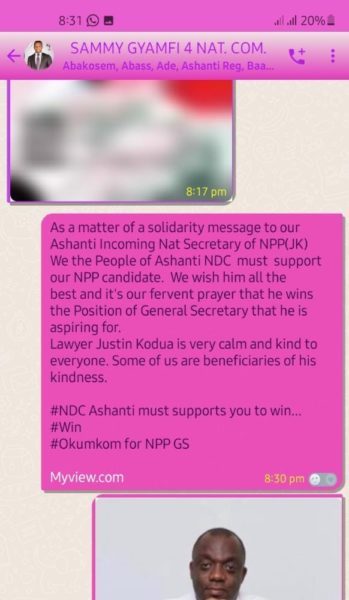 Remember that the road to success is paved with doubters and haters. We shall never make a mistake to make NDC’s dream come true! Delegates shall vote for you tomorrow for us to break the Eight.

May NDC’s Evil Wish rest on them to stay in Opposition forever… Amen!