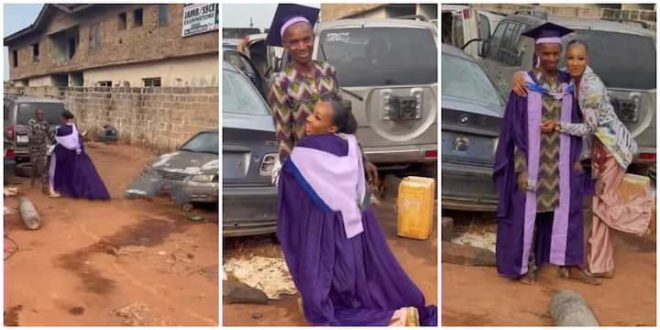 Female Graduate Runs to Her Father’s Mechanic Workshop, Hugs and Dresses Him in Her Graduation Clothes in Clip Monday, February 14, 2022 at 8:20 AM

A female graduate treated her father to a pleasant surprise as she appreciated him for training her in school.

The overjoyed lady ran to her father’s mechanic workshop and gave him a hug before going on her knees to express gratitude.

The fresh graduate also dressed her father in her graduation clothes and received prayers from the stunned man.

A lady upon graduation from school stormed her father’s place of work to show gratitude in an emotional fashion.

The Nigerian lady identified as Lydia Okojie hurried to her father’s mechanic workshop while rocking her graduation gown.

She dressed him in her graduation clothes Photo Credit: Screengrabs from video shared by @yabaleftonline Source:
Instagram

She dressed him in her gown In the heartwarming video shared by @yabaleftonline on Instagram, the lady was received by her father with a side hug after which she proceeded to kneel before him in gratitude.

Her kneeling was followed with heartfelt prayers from her dad who wished her success in future endeavours. What followed suit was father and daughter posing for photos, this is after she had dressed him in her graduation clothes.

Watch The Video Below:

Netizens gush @aramide024 stated: “So beautiful I hope people are proud to show off their parents like this o.”

@gylliananthonette wrote: “That’s the prayer of every parents to be alive to see their children graduate..God bless them.”

@the_shottakers opined: “That’s beautiful to watch …❤️❤️❤️❤️ Congratulations to her… honour the struggle of your parent.”

@toebee_19 remarked: “Such a heartwarming video, I was smiling all through; God bless all the parents working their socks off, making lots of sacrifices just to make sure their children succeed against all odds. You all are the real MVPs.” Man dresses mum in his graduation clothes as he celebrates her.

Meanwhile, Legit.ng previously reported that a man had celebrated his mother who sold bread to train him in school by dressing her in his graduation clothes.

The young man’s mother reportedly financed his education at the university with money from her bread business.

And he decided to eulogise her on the occasion of his graduation.

With neither silver nor gold, he chose to robe his mother in his graduation gown. The duo then posed with a bowl with loaves of bread.

Previous Let Apeate Accident Advise The Way We Construct Our Roads, Coalition Of National Youth Organizers
Next These foods will boost your sex, immune life