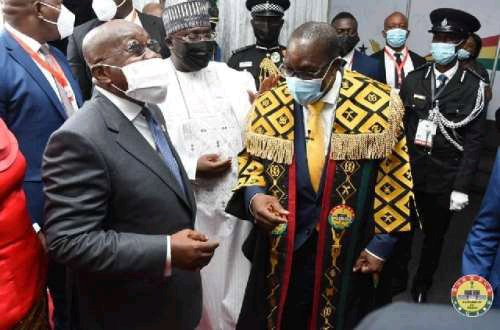 The Speaker of Parliament has refuted claims by the Majority in Parliament that he does not inform the President when travelling out of the country.

He issued a letter dated 6/1/2022 that informed President Nana Addo Dankwa Akufo-Addo about his trip to Dubai for medical review. 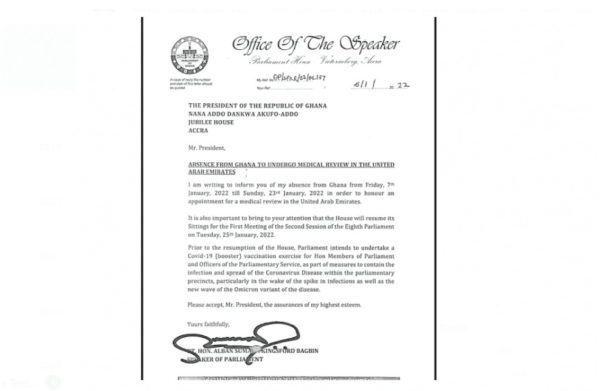 The Majority in Parliament had expressed concerns that Mr Bagbin does not inform the President when travelling out of Ghana without informing the President.

The caucus says it is expected of the third gentleman of the land to inform the first gentleman anytime he is exiting the jurisdiction and vice versa.

See also  The Answers Are Blowing In The Wind: "How many cocoa farms, river bodies must be destroyed" ~ Osei Kofi Acquah, CPP National Youth Organizer

But in a statement issued on Monday, January 17 to respond to concerns raised by Minority on the withdrawal of military officers from the security detail of the Speaker, the Majority observed Speaker Alban Sumana Kingsford Bagbin flouts this not unlettered protocol.

“The Speaker of Parliament, in terms of precedence, is the third gentleman of the land and one expects that when he is exiting the jurisdiction he must inform the presidency ahead of time since the Speaker is the person to act as the President in the absence of the President and the Vice President.

“In all the many travels of the Speaker in 2021, he did not find it worthy to inform the Office of the President. What is the import of that?”

The New Patriotic Party (NPP) Members of Parliament (MPs) insist the regularisation of the military’s role in the Speaker’s security is not politically motivated as claimed by the Minority.

“What is the proof? Or is it the case that they consider that since the Rt. Hon. Bagbin is NDC he is there to do the bidding of NDC and hence any critique of the Speaker or any action aimed at the Speaker is a critique of or action against the NDC, and therefore should be considered as being politically motivated?

“The people of Ghana know better and certainly can make the distinction between truth and sheer propaganda.”

Previous Asante Akim: Fulani herds men chopped off 15yr old
Next Leader’s Perception About The Ghanaian Youth And What They Desire Is In Life Is Far From Fetch- CPP National Youth Organizer writes.