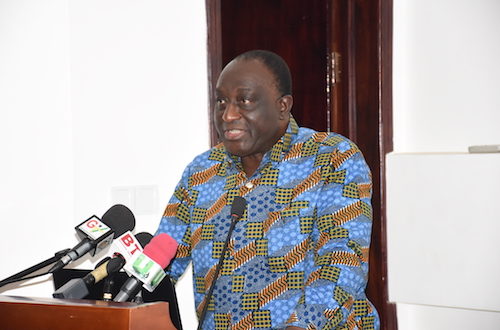 “The Foundation of a Nation Relies Heavily on its Culture” – Trade Minister Tells Chiefs.

The Minister of Trade and Industries Hon. Allan Kwadwo Kyeremateng has indicated that the foundation of every country is it culture heritage therefore the need to build our country through it existing cultural practices.

The trade minister further said the cultural practices also emanates from the traditional authorities in our various palaces hence the need to build a resilient palaces for our chiefs so that they can propagates or disseminate these cultural practices to the people living in the country.

According to the Trade Minister, Palaces plays major roles in the development of a country in that it serves as traditional court of arbitration for peace enhancement in our communities.

Palaces also serves as a safe grounds for all strangers who may need urgent help or support since they are not indigenes of that particular community.

Therefore any country or society which exist without a well structured and resilient palace can be exposed as having a weak foundation making that country’s or community’s culture weak as well.

See also  Eat, Speak, And Wear Ghana To Sell Our Rich Culture To The World ~ Presbyterian Church To Ghanaians

The Trade Minister made the disclosure in a speech he delivered during the Effiduase Traditional Authority in New Juabeng to Raise funds towards the completion of phase one of the new palace project in Koforidua in the Eastern region.

The Trade Minister donated an amount of Ghc 20,000 and hundred bags of cement.

Meanwhile, Okoawia Dwomo Baabu (II) Effiduasehene and also the Nifahene of New Juaben Traditional Area narrated that any traditional area without a community palace create some misunderstanding because some chiefs uses their family house as their palace.

He said Effiduase has existed for about 140 years without a palace , and he inherited the throne 12 years ago therefore he decided to change the situation by building a community palace for Effiduase township before he exit as a chief.