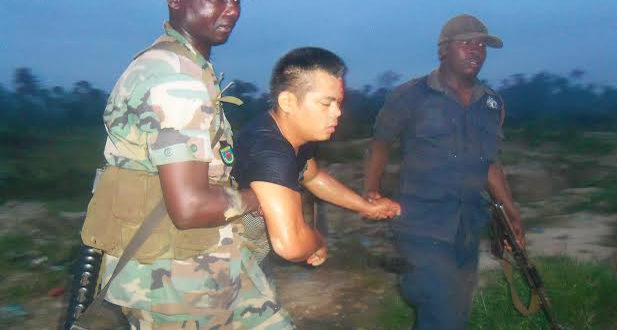 Isaac Boateng a native of Jachie in the Ashanti region and a concrete machine operator who was stabbed by the neck by a Chinese national Xue Hue at a construction site at Kweikuma in the Sekondi Takoradi metropolis of the western region has opened up to peace news for the first time in an exclusive interview the situation that led to ungodly action by the Chinese.

Speaking to Appiah Danquah Rok fm, he explained that he demanded his money from the work he has done from the Chinese and without any provocation Xue Hue stabbed his neck.

Isaac Boateng appealed to the government to support him to get justice because he is in pains and does not think he can do work anytime soon and must not treat the case as we used to do because the Chinese are multreating Ghanaian workers at various sites in the country.

Meanwhile Ghana police service has released a statement over the arrest of Xue Hue below is the details.

The Police have arrested a Chinese national for using an offensive weapon to cause harm to his Ghanaian co-worker at a construction site at Kweikuma suburb of Takoradi, in the Western Region.

Preliminary investigation indicates that the suspect, Xue Hue, on September 28, 2022, allegedly attacked the victim, who is a mason with a construction company at Kweikuma, with a knife inflicting a cut on his neck.

The victim has since been treated and discharged.

Meanwhile, the suspect is in custody assisting investigation and will be put before court on September 30, 2022, to face justice.