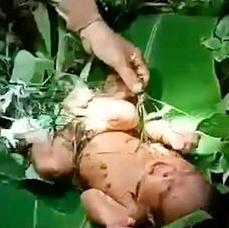 Sad Video, Photos As Newborn Baby Girl Found Alive In Forest With Worms, Inserts Crawling All Over Her

WARNING DISTRESSING FOOTAGE: When paramedics arrived locals were tending to the newborn at the scene and avoided carrying her for more than an hour through the night to return to their village

A newborn baby girl has been found alive in a forest with worms and insects crawling all over her.

She had been there for two days and was abandoned with grazes and bruises on her face insects on her skin when villagers found her .

The infant was naked and was lying on banana leaf plants which covered the ground.

They wiped her face and body with leaves and ensured she wasn’t badly hurt.

She began crying when rescued by villagers and was laid out on the ground as they waited police and and ambulance services to arrive.

When paramedics arrived locals were tending to the newborn at the scene and they avoided carrying her for more than an hour through the night to return to their village in Krabi, Thailand.

She was wrapped in a blanket and put on an ambulance stretcher before being taken to hospital where she was treated for dehydration.

The little girl was treated for dehydration and kept under observation but is reported to be healthy and without any lasting health problems from her two nights in the forest.

She survived, despite being discovered in an area which is home to dangerous animals and snakes with daytime temperatures of up to 35C.

Police are searching for the girl’s mother but said it would be difficult to re-trace her footsteps.

In the Daily Mail, police Colonel Prasit Yodthong said: “The newborn girl had worms and insects crawling over her body.

“We are currently tracking down the newborn’s mother. She will be prosecuted. The baby could have died and we think that whoever left the girl, knew this.

‘We think that the baby had been left outside for at least two days. She was there for a whole night but survived.”

Police are reported to be interviewing people to try and find a woman who was recently pregnant.

They are talking to people in neighbouring villages to try and identify the baby’s mother.

The newborn was taken to Khao Phanom hospital where her health will be monitored,

Authorities in Thailand will then transfer her to the Krabi provincial administration when she has recovered.

It is likely she will then be placed in the area’s care where orphans are looked after.

Previous Accra: Executives Of Queen Mothers Association In Ghana Pays A Courtesy Call On Agric Minister.
Next Police Reacts To Violence In Parliarment