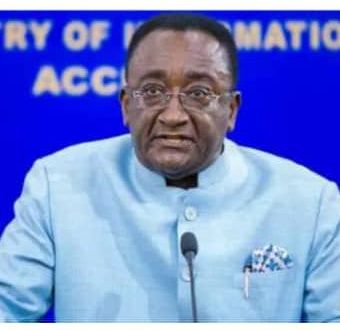 Dr. Owusu Afriyie Akoto has Remained a Major Fundraiser for the UP Tradition
even before the Birth of the New Patriotic Party- modern NPP

Before Chairman da Rocha and the elders came up with the name New Patriotic Party (NPP) and its official inauguration in July 1992, members of the United Party’s (UP) tradition under the era of the Late Flight Lieutenant Jerry John Rawlings, the Head of State of Ghana under the Provisional National Defence Council (PNDC) military regime, called themselves the “Progress Party of Old”.

The name, “Progress Party of Old” was adopted from the name of the offspring of the UP Tradition, Progress Party (PP) which served as the Governing Party under the Second Republic of Ghana between 1969-1972.

It is trite knowledge that Dr. Owusu Afriyie Akoto just like his father, Okyeame Baffour Akoto, had been a key fundraiser for the Modern NPP till now, but little has been known that, his highly significant raising of funds toward the development of the UP tradition predates the birth of the modern NPP.

In fact, when the members of the UP tradition called themselves the “Progress Party of Old” as specified in the aforesaid paragraphs, Dr. Owusu Afriyie Akoto was part of a team of dedicated, committed, passionate and blue-blooded loyalists of the UP tradition who were organising and raising funds abroad for the resuscitation and advancement of the Tradition.

Note, Okyeame Baffour Akoto- Founder of the National Liberation Movement (NLM), was a major fundraiser for the NLM, Northern People’s Party (NPP) and the Progress Party (PP). NLM is a major pillar of the UP Tradition which as well served as the major element which weakened the strength of the Convention People’s Party (CPP) and its political hold of the Country between 1954 and 1966. The foundation and nucleus of the support base of the NLM currently serves as the major stronghold of the New Patriotic Party.

Find attached as proof a picture of a letter dated 21st May, 1992 detailing Dr. Owusu Afriyie Akoto’s role as the Coordinator of the Sponsoring Committee which was zealously soliciting for funds around the world for the rejuvenation and sustenance of the UP Tradition. 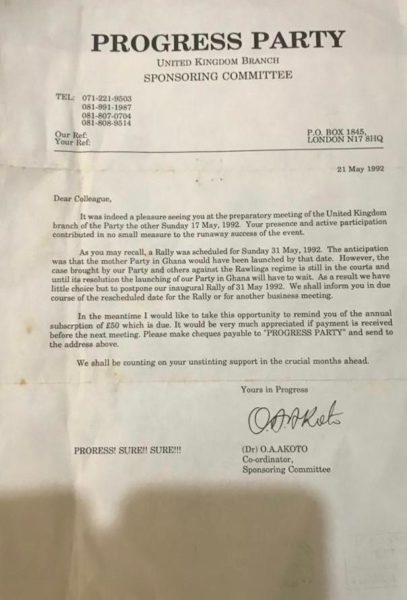 Dr. Afriyie Akoto is the current Minister for Food and Agriculture.