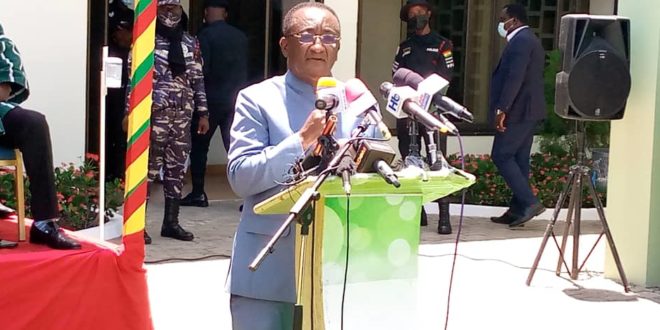 Dr. Owusu Afriyie Akoto, Minister for Food and Agriculture has held discussions with stakeholders in the sector on issues of cross-border trade in farm produce, fertilizer subsidy, and smuggling of subsidised fertilizer, which are affecting food security in the country.

The discussions sought to agree on how best to approach such issues to ensure increased food production and availability of food in the country as well as making agriculture profitable to farmers.

The stakeholders at the discussions held in Tamale included Directors and Staff of Departments of Agriculture, some input dealers, and farmers drawn from the Northern Region.

Mr. Akoto, who set the tone for the discussions, said the country could not ban the export of farm produce to other countries in the West Africa sub-region because of free trade protocols.

He said the export of farm produce to neighbouring countries ensured good prices for farmers, which was a great incentive for high production.

He noted that there was the need to strengthen the National Food Buffer Stock Company (NAFCO) to buy and stock more food for the country, saying, the government would soon put before Parliament a bill to transform NAFCO into an Authority to help in that regard.

Dr. Akoto touched on fertilizer subsidy and said the prices of fertilizer had tripled and the country could no longer bear the 50 percent subsidy cost.

He gave the assurance that efforts were made to ensure the availability of adequate fertilizer for the next farming season and urged all stakeholders to support efforts at eliminating the smuggling of subsidised fertilizer.

The perennial smuggling of subsidised fertilizer has been a bane to food production in the country. However, the situation was exacerbated this year when there was not enough fertilizer for some farmers to purchase for their fields.

There have also been complaints of high food prices in the market this year because of the export of farm produce to neighbouring countries.

Some of the participants during the discussions called on the government to establish an authority to oversee the export of farm produce to other countries to properly regulate the sector.

Mr. Nash Sulemana, Managing Director of Intercontinental Group Ghana Limited, dealers in chemicals and fertilizers, said issues surrounding the global supply of fertilizer meant that prices of fertilizers would rise in the next farming season.