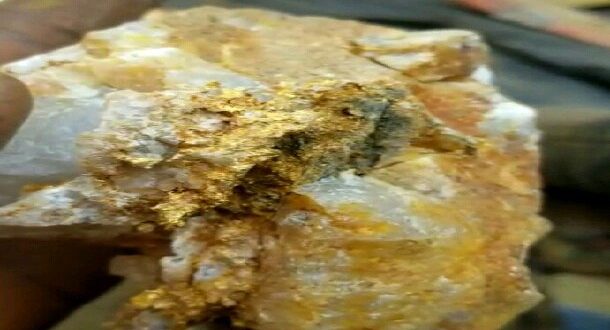 Seated near to other rocks, nearer to bush leaves, was a raw gold stone engraved together on over six pieces of metamorphic rock.

The metamorphic rock with its white nature was overtaken by the gold blades as it kept decorating the entire rock with its shining smooth colour. Kwamena! Kwamena!! Kwamena!!! John Yeboah known as JY, shouted for his trusted companion in mining as the two friends started jubilating.

I have never seen such a blade before in my over twenty years of mining experience, JY said in an interview. 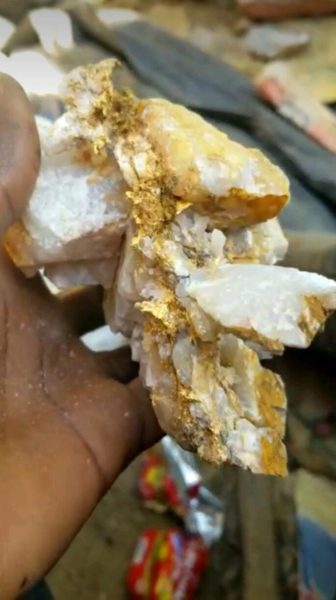 Whiles the others were envying how JY, 32, got hold of such a precious item, Kwamena echoed to him to balance the gold away from the crowd over the fear of been robbed. True to Kwamena’s fear, JY was almost robbed as he tried rescuing himself from the crowd.

JY was able to balance the real raw gold with some rocks as he walked home last week Tuesday. On their way home, three men approached them from the Odumasi Anglican teak plantation, with machetes but it was too late for them as they found nothing on the men. If JY hadn’t taken the advice of Kwamena, his life would have been traded for the gold on Tuesday 28 September.

JY together with his trusted friend Kwamena, got hold of the gold this morning and they made their way out of Konongo Odumasi to find a buyer after hiding the ornament for over six days.

Whether they would be able to sell it or not, keep it or donate it, it has been recorded in the Konongo Odumasi township that, this is the first time a raw gold of such magnitude and capacity has been found on the floor by someone.

Though it was found at a mining site, nobody can claim ownership of the gold as the mine belongs to the entire community.

It wasn’t found in a mining hole, but a dumping site where everyone dumped their unwanted load so nobody can claim ownership of it, Wofa Atta, the head of operations for the Konongo Odumasi Community Mines.

JY true to himself, could not explain how he came by the gold. All he could remember was feeling the urge to take a piss. I felt I had to urinate so I passed by the dumping site which was a block away from our mining pit to ease myself, and I just came across it. It wasn’t buried in the mining sand, but was laying few meters away from the Acheampong Leaves (Siam Weed), JY said.

JY under the protection of his trusted friend Kwamena did not explain what they would use the gold for, but it has been established that the two plan to make a better life for themselves after living in poverty for over twenty-eight years.

Previous They Call Themselves Honourable But They Are So Dishonorable- Beresford Hughes
Next JUST IN: Finance Minister To Resign