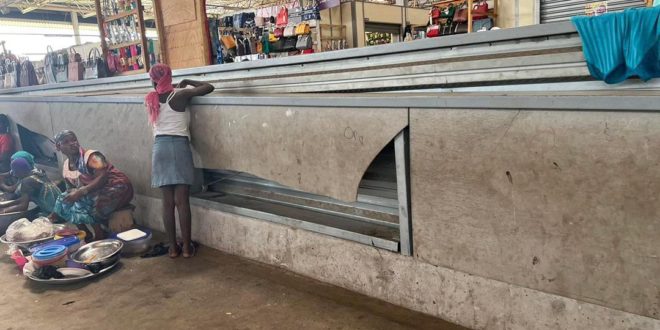 The newly constructed ultra-modern Kumasi Kejetia Market has started developing serious structural defects a few years after it was completed and handed over to the Ghanaian government.

The facility according to occupants, is gradually turning into a death trap as traders warn of a looming disaster if measures are not immediately taken to check the rate of deterioration

Some metals used to build the market by the contractors have started peeling off due to a lack of maintenance by the authorities.

The Chairman of Federation Kumasi Traders Nana Akwasi Prempeh posted the pictures on his Facebook and wrote “The Kejetia market complex is one of the monumental edifices in the Kumasi metropolis and one of its kind in the country. Luckily for inhabitants of the metropolis, the market was built by CONTRACTA, a Brazillian firm who are also working on phase two of the project”

“Our checks reveal that the Brazilians were to manage the market for the first three to five years. But unfortunately, that option of operation and maintenance contract was not given to them. So why were they not given the contract?”

Nana Prempeh explained “The current state of the market Vis -a- vis the lack of maintenance in the market makes it a bad decision on the part of those who took that decision. There are parts of the market that needs routine maintenance and it’s not being done”.

“We traders fear the market might be closed down before the completion of phase two.

According to him “I won’t be surprised if by 3 years’ time authorities shut down Kejetia Market for renovation works because the current state of Kejetia Market is very dangerous and disheartening”.

“I will blame poor management over the current state of Kejetia market because the authorities have failed to put proper measures in place to protect the market,” he said.

“KMA boss Sam Pyne and Manhyia Palace should call the Managing Director of the market for interrogation and if he thinks the work is difficult for him, they should sack him and bring a competent person who can manage the market” he added.

Previous Sosu, Sosu, Sosu: How many times have I called you??- passionate letter by a member
Next Appiatse Explosion: First Lady Supports Victims With These Items