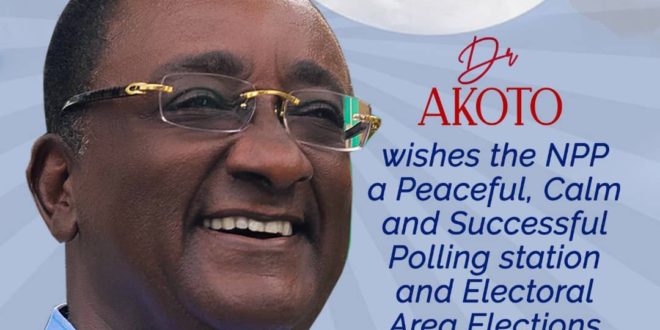 As the New Patriotic Party (NPP) commences the conduct of its Polling station and Electoral area elections from 19th February, I would like to use this opportunity to wish the party very peaceful, calm and successful elections across the country.

As we all know, the polling station executives form the base of the executive wing of the party. The elections, as a result, remains the most crucial because, this is the section that consistently have direct contact with the electorates for general elections.

In view of that, getting the most committed, dedicated and loyal Patriots to serve at this level of the Party’s structure to steer and spur the activities of the party, as has been the case since 1992, should be very paramount and dear to the party at this particular moment.

Just as the youth and the commoners formed the foundation for the struggle of the National Liberation Movement (NLM) headed by Okyeame Baffour Akoto against Dr. Kwame Nkrumah-led Convention People’s Party (CPP) government on its sacrificial objective to set the nation on a path of democratic rule, so will the next to be elected Polling station Executives form the most important part of the army for the 2024 General elections victory against the National Democratic Congress (NDC).

To reiterate, I pray and hope for very calm and successful elections which will inure to the benefit of the general 2024 objectives of the NPP.