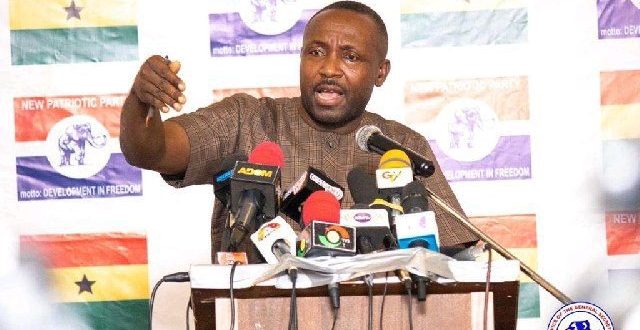 Kennedy Osei Nyarko, Member of Parliament for Akim Swedru has defended General Secretary of the ruling New Patriotic Party over comments he made against Speaker of Parliament, Alban Bagbin.

Some National Democratic Congres MPs are pushing for John Boadu to be hurled before the Privileges Committee for asking Speaker Bagbin to go and collect suspend road tolls if he is so minded.

In an interview on Joy FM’s News Night programme, the MP pointed out that Boadu’s comments needed to be taken as a whole and in context explaining that he started off by agreeing with the powers of Parliament as asserted by the Speaker in directing the reversal of the toll suspension.

Forever Product
“You have to listen to the whole conversation, you don’t pick a portion of it, he (Boadu) started by saying that the Speaker was right with the decision that he made then he went further to explain before making the comment that he made.

“So when you want to just expunge some of the conversations and just rely on it, you don’t make the conversation complete. He has admitted that the decision by the Speaker was right, he is right,” he added.

He further questioned whether the Speaker had acted arbitrarily by directing that the toll removal be reversed because it had yet to be ratified by the House. He averred that there was the need for a resolution by the House to trigger such a directive.

At an NPP gathering in the Central Region, Boadu commented on a raging issue between the Speaker and Roads Minister Kwasi Amoako-Atta on the issue of road toll suspension.

“Technically the Speaker was right, if there is a law enacted by Parliament, it takes the same Parliament to vacate it, is that not so?

“But what the Minister did was also right because when the toll removal was announced, if he does not issue a directive, there will be chaos at the toll booth, he did not vacate the law, he said he it was the operationalization of the law that he was regularizing.

“There would have been lots of confusion between the toll attendants and motorists, so let’s suspend it. If the Speaker was minded in his directive, why did he not go and supervise the collection of the suspended tolls?

The decision to suspend was contained in the 2022 Budget that has yet to be clarified by the Minister ordered enforcement of the suspension which move was protested by the Minority in parliament.