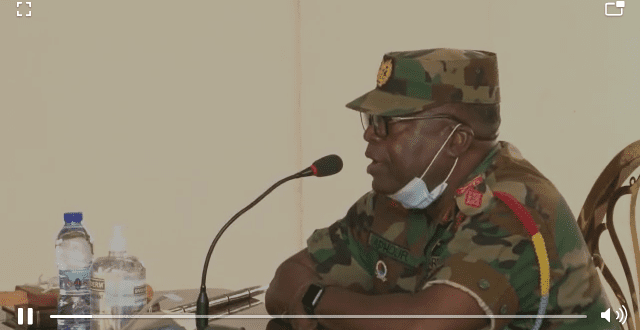 Ejura: There would have been more death– Brigadier General.

The General Officer Commander of Central Command, Brigadier General Joseph Aphour has said that there would have been more casualties in Ejura if the Military had used excessive force.

He told the 3-member committee on the Ejura disturbances that the military applied minimal force in controlling the crowd.

He said “It was becoming too bad for us to see civilians firing from the crowd.

I think the Commander at that stage then had to use minimum force by trying to fire to maim those people who were involved. So you realized that we fired and then we didn’t have instant deaths within the crowd.

“They were evacuated to the hospital and two died. What we did that we strongly believe that there would have been more deaths if we actually wanted to proper force of firing indiscriminately more would have died.

“We tried to maim the people, we sued the minimum force not to create more problems.

“With that minimum force the effect was there, the crowd was dispersed and we were able to control the situation.”

Meanwhile, Justice Kingsley Koomson has recommended to the Ghana Armed Forces (GAF) to apply for plastic bullets to use in controlling crowd in Ghana.

He rejected the use of live bullets to disperse crowd since this can be fatal.

He said this when Brigadier General Josephs Aphour appeared before the Committee.

“I think the Military will put in application for platcis bullets we are talking at human lives, don’t be applying fir live bullet,” Justice Kingsley Koomson said.

The committee was formed by Interior Minister Ambrose Dery following the gruesome murder of Macho Kakaa in Ejura over the weekend.

There was also a violent clash among the military officers and the youth of the area who were demonstrating in that town on Tuesday, June 29 following the murder.

This led to the death of two persons with four sustaining various degrees of injury.

Brigadier General Josephs Aphour while answering questions posed by members of the Committee said “My Battalion Commander called me the day of the incident that that was happening in Ejura, the indent that we all know.

“Then I had a call from the Chairman of REGSEC that the situation was getting out of control and that there was the need for us at Operations Calm Lives to move inside, if not things will get out of control.”