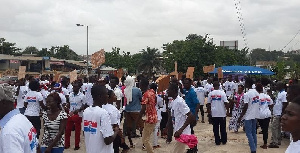 The youth in Achiase constituency of the New Patriotic Party (NPP) in the Eastern region are angry with the party executives for rejecting donation of a set of desktop computer and a 42inches television set by a party patron Mr. George Nuako popularly called “Bulk Money”.

They explained to Peace FM that they see no reasonable reasons for rejecting a donation of items the executives of the party requested for and God being so good, a party patron has presented them but because of internal politics which was resolved after their constituency executives election they are rejecting it.

They have therefore called on the regional and national executives of the party to as a matter of agency to call their constituency executives to order and to received back the items else they will wake up to hear an unpleasant news from the Achiase constituency of NPP.

The Achiase constituency NPP secretary; Mr. Sylvanus Mintah Boateng speaking to Peace FM explained that the executives of the party got divided on the acceptance of the items due to some political reasons being that the donner Mr.George Nuako (a.k.a Bulk money) maybe having political ambition of becoming member of parliament (MP) hence the need to reject it but the chairman of the party will call for a proper meeting on how to collect the items back because they really need them for office work.

See also  I Haven't Been Sidelined In NPP- Boakye Agyarko.