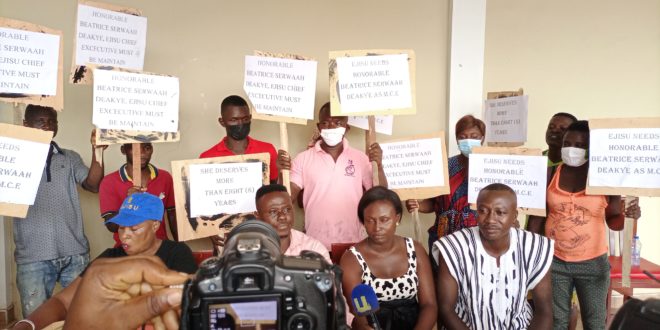 Concerned Npp Youth in the Ejisu Municipality of the Ashanti Region has called on the President of the Republic, Nana Addo Dankwah Akuffo Addo to retain their hardworking, unifier and development oriented Leader, Hon Beatrice Serwaa Deakyi as Municipal Chief Executive for Ejisu Municipal Assembly in his yet to announce MMDCEs.

According to them, they have witnessed massive developmental projects in the Municipality within the space of her assumption at post over any MCE in Ejisu.

Majority of the youth who are indigenes in Ejisu Municipality and were made up of polling station Executives, Unit committee Members, Assembly Members and Npp faithfuls believe that Hon Beatrice Serwaa Deakyi’s hard-working and selfless leadership have brought the light of overwhelming development in Ejisu.

In a press conference held at Krapa, they appealed and sought the indulgence of Nana Addo Dankwah Akuffo-Addo to maintain the former regional women’s organizer to continue her good work for the good people of Ejisu.

They categorically stated that all allegations peddled by some market women against the mother for all chief executive were calculated fallacies, lies and to gain self honor and popularity.

The aggrieved youth charged that they will not sit aloof for people due to their common selfish interest rebuke the hard earned reputation, high level of performance and unflinching support achieved by the current municipal chief executive, Hon Beatrice Serwaa Deakyi to brought to disrepute.

Mr Dua Aaron Prince, who spoke on behalf of the group urged the general public to totally disregard such report and appealed the President to consider the outstanding performance by Serwaa Deakyi and reappoint her as the next municipal chief executive for Ejisu Municipal Assembly.