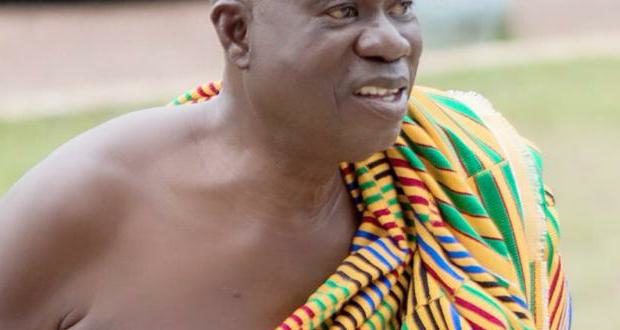 A/R: Former MP wants to bring Old and New Patriotics together as He files form to contest Council of State Post.

Chief of Atwima Ahodwo Traditional area in the Atwima Nwabiagya District of Ashanti, Nana Adusei Sarkodie I has called on Ghanaians to vote for someone who is development oriented, knowledgeable, counsellor, experienced and has welfare of the people in the Ashanti region and Ghana at large for the post of the Council of State Membership election.

He made this remarks as he filed his forms to contest for the Council of State Post in the Ashanti region which is slated Nationwide on Friday 12th February, 2021.

The two terms former Atwima Nwabiagya Constituency Legislator in 1996-2005 who was also a member of Parliamentary Selected Committee on Education in elsewhere Former President Kufour administration from 2001-2004 hinted that the position of the council of state is very imperative and needs someone who can bridge the gaps between the old and new fraternity when it comes to the party affiliation.

According to him the New Patriotic Party’s unflinching support in the Region has declined as it was seen during the 2020 Presidential and Parliamentary Elections as a result of apathy, He added and assured that when given the nod he will cement the gap to make the party attractive.

In an exclusive interview afterwards with heroesghnews.com, Hon. Nana Adusei Sarkodie I appealed to the electoral college which is made up of two representatives from each of the Metropolitan, Municipal and District Assemblies MMDCs according to the Constitution, to vote for someone who has future prospect ambitions for Ashanti region and could easily liase with H.E. Nana Addo Dankwa Akuffo Addo.

He deduced and disclosed that as a former colleague to Nana Addo in Parliament, he would use his experience to enhance development and direct the later’s attention to the region.

Ghanaians will once again go on polls to elect
Council of State Members on the 12th of February, 2021 who will represent each of the 16 Region to Council the President in the next 4 years according to the Constitution.

Meanwhile the President, Addo Dankwa Akuffo-Addo, persuant to article 89(2) of the Constitution had already appointed 11 persons to the Council of State headed by Juabenhene, Nana Otuo Siriboe II.

Previous AHAFO/REGION: Groups called on President to Re-nominate MCE
Next Sad news 😥😭: As Teacher admits, confesses for killing his student.