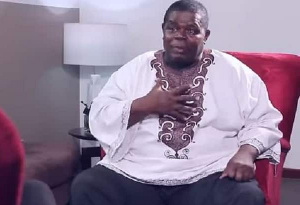 News just coming in is that vetean actor, Psalm Adjeteyfio has died.

This was announced by veteran journalist, Kofi Asare Brako.

“Rest in peace, Psalm Adjeteyfio, a.k.a. “The veteran Ghanaian actor Psalm Adjeteyfio revealed a couple of weeks ago that he has been diagnosed with end-stage heart failure which has indirectly placed a limit to his lifespan.

“He passed away this morning at his Ayikuma home, the source said,” he said.

Psalm Adjeteyfio has been in the news multiple times over the past few years due to his endless begging.

He received numerous help from various sources but invariably found ways to squander the money and come back for more.

Psalm Adjeteyfio first gained popularity in the 90s through movies and the television show Taxi Driver.

He played loveable taxi driver TT, alongside stars such as Papa Nii Papafio and George Quaye.