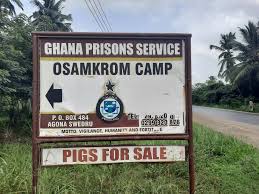 The Techiman Circuit Court in the Bono East region Presided over by His Lordship Alexander Greyham has sentenced 35 year old Kwasi Poku alias “Sika Gari” a self-styled businessman who resides at Wamfie into five (5) years imprisonment with hard labour for stealing an amount of GhC40, 000 belonging to Madam Faustina Asantewaa Cynthia who is a deputy Municipal NADMO Director at Techiman.

Briefing the Media after the Court ruling, Chief Inspector C. Y. Sertorglo, Police Prosecutor in the case revealed that the notorious fraudster who initially gave a fake name (Kwame Dan) but thanks to his SIM Card registration was identified as Kwasi Poku somewhere in November 2019 succeeded in swindling and stealing GhC40, 000 from the unsuspecting victim under the pretence of selling or exchanging French currency (CFA franc) to her in Techiman.

He said the stubborn criminal knowing very well that he stole the money intentionally denied the charges preferred against him in Court and for the past two years have dragged the case in the Techiman Circuit Court but thanks to Justice Alexander Greyham, “Sika Gari” has been sentenced and ordered the remainder of the money deposited in his bank account be released to Madam Asantewaa Faustina.

Chief Inspector Sertorglo used ceased the opportunity to caution and advise the youths to refrain from stealing or any other illegal means of getting quick money because the laws of Ghana wouldn’t spare anyone caught.

for Heroesghnews by Adu Jackson

Previous Police Special Swoop: Mass Suspected Criminals with Indian hemp grabbed
Next Our School is in A Poor State, Among Others- Abrem Essiam Basic school Laments.