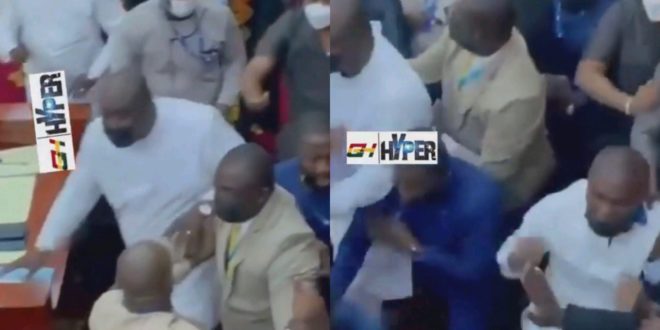 Our Parliamentarians are the trend for the day after their feud which happened in the early hours of 21st December 2021 sadly.

In the video, about 20 of the MPs were sighted exchanging punches with a misconstruing in the chamber.

Meanwhile, Hon. Mustapha Ussif, the Minister of Youth and Sports was seen in the scene. He was busily defending some punches which were being thrown against him.

Sadly, he received one on his face but kept on fighting. He was the one in the white African wear.

Watch the video below;

Previous NDC MPs Sing Song Of Victory As Parliarment Is Adjourned By Joe Wise Till January Next Year
Next Watch Moment Fomena MP Mistakenly Ruled For Majority, Although For Minority