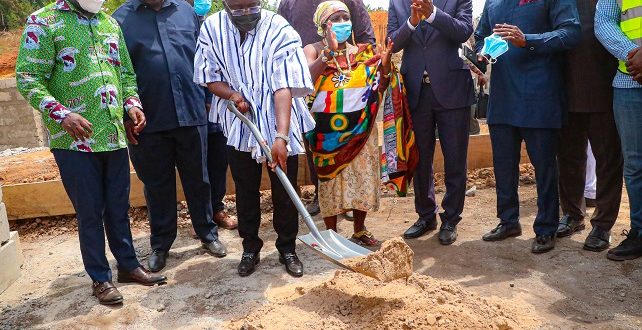 This promise was made during the celebration of the Akuapem Presbytery of the Presbyterian Church of Ghana during their 100 years centenary celebration where vice president was the special guest of honor.

There was a an appeal by the Presbyterian Church Akuapem Presbytery to raise funds towards the construction of the deplorable Presbyterian JHS Block for Kwaboanta which makes it difficult for JHS pupil to access it.

But the vice president Dr. Bawumea was moved by the spirit during the fund raising and made a pronouncement that, he will single handedly fund that project which he has delivered on his promise.

Speaking at the ground breaking ceremony, the Akuapem Presbytery Chairperson, Rev. Ishmael Dometey Asare commended the Vice president for such a step towards education and also keeping to the promise he made to them and all the funds towards the project has been delivered already by the vice president.

See also  Quick Corruption Is What We Usually Ignore, But it Is One That Imperil The System The Most... Veep

Ogyeahoho Berimah Anom- chief Dokokyewaa commended the vice president for the project but also requested that a computer lab should be added to make the project a complete package for them.

He also on behalf of the the chiefs in the area asked Government to take a critical look at the deplorable Adoagyeri to Coalter Owuram road for Them as that’s their main road joining other cities.

Also, Education continues to be the priority of this government. Therefore, it’s not a mistake that the vice president took upon himself to honor the Kwaboanta people with such an edifice.

Also Assured that, the request of a computer Laboratory to the JHS will be done for them.