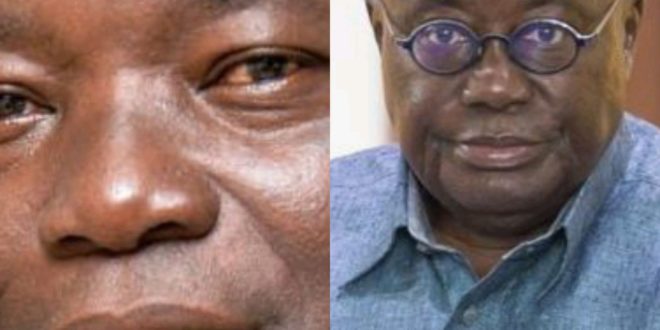 T’aadi: Arrested and Suspended MCE boldly replies Akufo-Addo and Police with this message

The Municipal Chief Executive for the Sekondi-Takoradi Municipality of the Western Region, Abdul-Mumin Issah, has reacted to his suspension from office as directed by the President of the Republic, following the verbal assault incident that transpired between him and one police officer in the evening of Thursday, February 3, 2022.

According to Abdul-Mumin Issah, he was reliably informed of the directive by the President, Nana Addo Dankwa Akufo-Addo, to have suspended him from his position as the MCE for Sekondi-Takoradi owing to the incident between him and one police officer and is willing to cooperate with the police service because he believes that the truth will surely prevail.

I have already been informed of His Excellency Nana Addo Dankwa Akufo-Addo’s decision to suspend me from office as the Municipal Chief Executive of Sekondi-Takoradi following the unfortunate incident that ensued between myself and a police officer at a check-point close to the Takoradi Cemetery on the night of Thursday, February 3, 2022.

He went ahead to thank President Nana Akufo-Addo for the privilege and opportunity to serve in the government as MCE, and also thanked the Minister for Local Government, Decentralization and Rural Development, Dan Botwe as well as the Western Regional for their various support and advice they rendered to him while actively serving in office.

“As I proceed on my suspension, I wish to thank President Akufo-Addo for the fatherly love and opportunity to serve in his government. I am not oblivious of the fact that it not over until it is all over.

“I am convinced that in the fullness of time, the real truth surrounding that unfortunate incident will prevail,” he said.

“I again thank my colleague MMDCEs, the Presiding Member, Coordinating Director, Assembly Members, the Solicitor and the entire staff of Sekondi-Takoradi Metropolitan Assembly for their unflinching solidarity during this period. I finally wish to thank my family and all well-wishers who have stood by me through these difficult moments,” he added.

He also assured the general public especially the good people of Sekondi-Takoradi of his fullest cooperation with the Police Administration for the successful prosecution and determination of the case, and that he is convinced that in the fulness of time, the truth shall prevail.