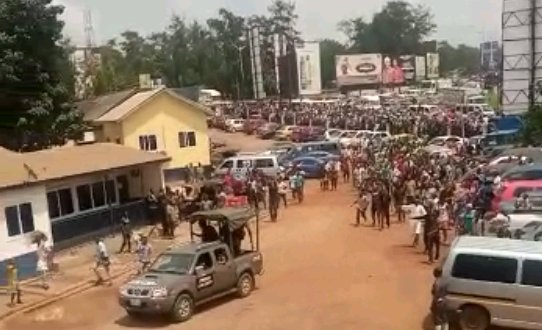 4-member c’ttee to investigate clash between Police and Military.

A four-member committee has been set up to investigate the clash between the Police and Military at the Suame Police station over an arrest of a soldier in connection with an unlicensed motorbike.

Four of the men, two policemen and two soldiers were said to have sustained injuries during the clash.

The committee has Assistant Commissioner of Police (ACP) Benjamin Osei Addai, Assistant Superintendent of Police (ASP) Ernest Kwofie of the Police Service and Colonel Jonathan Kumador, Lieutenant Colonel David Addi of the Armed Forces, has a week from November 2,2021 to submit its report to enable the two security agencies to take next line of action on the impasse.

This was contained in a statement jointly signed by the Acting Director General of the Public Affairs of the Ghana Police, ACP Kwasi Ofori and Commander Andy La-Anyane, Acting Director, Public Relations, Ghana Armed Forces.

The statement assured the public that a thorough investigation would be conducted into the matter and anyone found guilty would be dealt with according to the law and in line with the disciplinary procedures of the two agencies.

Last Friday, there was a clash between a team of the military and the police at the Suame Police Station resulting in the injury of two each.

Seth Amoama
It was the case that a police officer stopped a soldier in mufti, identified as Staff Sergeant Jamel, riding an unregistered motorbike at the Suame Roundabout over documents.

According to eyewitnesses, there was a misunderstanding between the police officer and the motorist who refused to stop initially, over a document on the motorbike.

Other policemen joined their colleague and allegedly manhandled the motorist who later introduced himself as a soldier and buttressed his point with an Identity Card.

The eye witnesses claimed the policemen allegedly hit the soldier with the butt of the gun, after they arrested him.

Angered by the situation, the soldier called his colleagues, about six of them, who stormed the police station and unleashed their fury on anyone on sight.

The Suame police had to call for reinforcement to contain the situation leaving two people with injuries.

It would be recalled that in May 2018, there was a similar incident where the military descended on the police in Tamale for arresting their colleague.

Seven policemen got seriously injured in that clash which was condemned by the public.