Breaking News
Home / GENERAL NEWS / Sekesua Market in a Deplorable State and at the Verge of Collapsing ~ Market Women Wails. 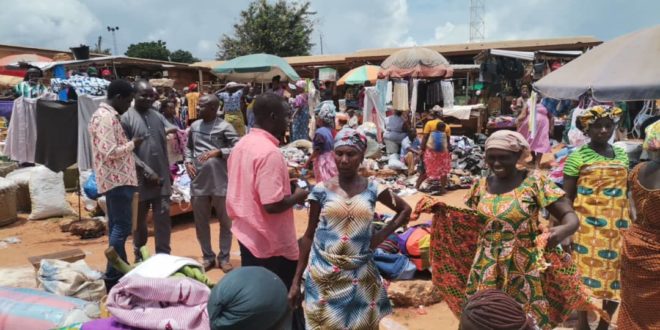 Sekesua Market in a Deplorable State and at the Verge of Collapsing ~ Market Women Wails.

Market women at Sekesua, a farming community in the Upper Manya Krobo District with with a popular market have expressed high level of dissactisfaction concerning of what they called a deplorable and collapsing Sekesua market.

The Sekesua market is one of the oldest market centres in the Upper Manya Krobo Municipality which serves many communities such as Osonoso, Breponsu, Sutapong, Kolieter, Sumu3, Takorase, Bormase and many others of which Wednesdays are noted to be a popular market days in the area.

Even though the market is considered as one of the oldest market in the Upper Manya Krobo district, the market has existed without any structure to accommodate the hundreds of market women who converge and ply their trade on daily bases in the market hence exposing them to the direct mercy of the sunshines and rainfall.

Speaking to some of the market women at Sekesua when peace fm news visited the market, they lamented that the market is on the verge of collapsing due to it deplorable nature because anytime it rains heavily they run at a lost since the major trade product in the area is the production and selling of ‘gari’.

Some of the Traders also shared their frustrations and concerns about the market. And therefore calling on the government’s intervention.

Terkpertey Abraham Teye, the assembly member for Sekesua/Bormase electoral area said he has petitioned the Upper Manya Krobo Municipal Assembly concerning the cruddy state of the market but so far nothing seems to be done to ameliorate the problem.

The Assembly member added that the lack of market structure is not the only factor contributing to the collapse of the market but also bad roads which links other adjoining communities to the Sekesua market has worsened the problem since many farmers finds it difficult to convey their farm produce to the market leaving them rotten in large quantities in their various farms.

On the other hand , the Member of Parliament for Upper Manya Krobo, Hon. Bismark Tetteh Nyarko blamed the government for delaying and not releasing the MP common funds on time for them to use portion to help support developmental projects in the area such as the construction of the Sekesua market.

That not withstanding, the MP noted that he used portion of his 2021 common fund to begin the construction of sheds for the gari sellers and still awaiting for the 2022 common funds to fully complete the project he started at the Sekesua market.