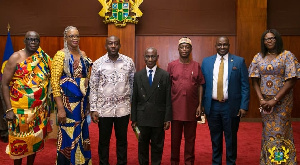 The governing board members of Right Information Commission led by, Mr Justice K.A Ofori Attah have paid courtesy call to the Omanhene of Sefwi wiawso traditional council to promote and enhance access by the citizenry through public forum on the right to information 2019 Act (Act 989).

Speaking at the palace, Mr Justice K.A Ofori Atta said the commission is mandated to let the public have access to information in the public sector.

See also  GACL writes to all airlines, airports to allow GhanaCard holders board flights to Ghana without visa

Mr Justice Ofori Atta speaking with Nattybongo of liberty fm, stated that before somebody can say anything, the person needs accurate information.

According to him, for instance there could be a proper investigation on why a contract was given to a contractor and the sum involved and also why some students passed and others failed on the same written examination to fight against corruption.

On his part, the Omanhene of Sefwi wiawso traditional council double as member of council of States and board member of Forestry commission, Katakyie! Kwasi Bumagamah on his speech said the Right to Information will brings transparency, but urged the commission and everybody, not to abused it but used the proper channel to access accurate information.

Katakyie stated emphatically that, he will support every initiative by this ruling government, for creating western north region to accelerate development and also had reduced stressed from his people.