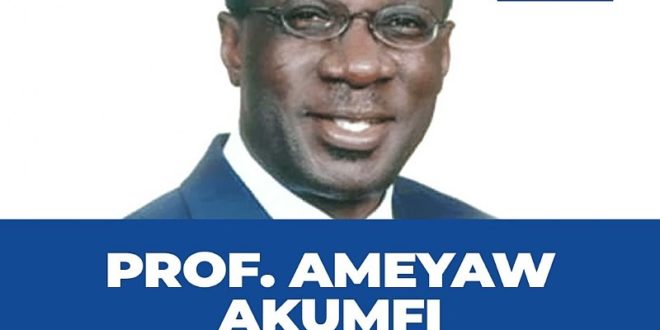 National Chairman hopeful of the New Patriotic Party (NPP), Professor Christopher Ameyaw Akumfi has promised to institute an ex-gratia scheme for executives of the party if given the nod.

According to him, party executives sacrifice a lot towards the fortunes of the NPP indicating that it’s imperative they are rewarded after all the hard work in order to give off best.

The Former Minister of Education and current Board Chairman of the Public Procurement Authority (PPA) believes this will boost the morale and revitalize the level of commitment of party members towards the work of the NPP. 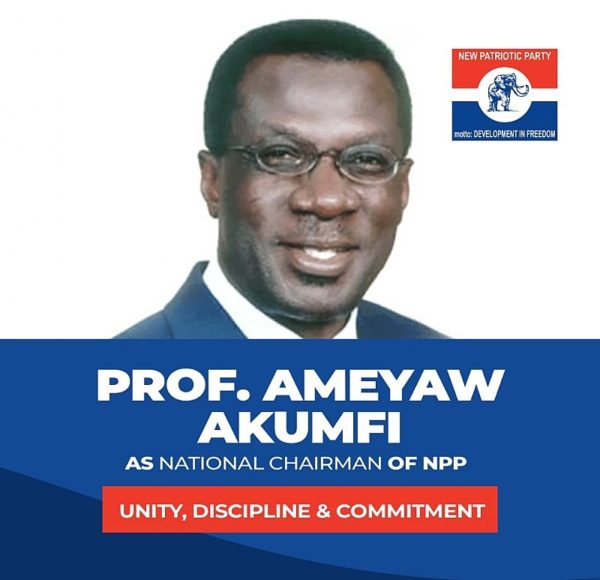 “What is also important to me is the welfare of party officers so that one day when they are no more party officers they’ll be given a proper fare well.

May be you are an executive but you will not want to contest again because you think others also deserve to come in and help the party. The same way some people get ex-gratia for their work, we have to in our own small way do something for former executives.

We mostly think it’s not possible but it is possible. How we mobilise funds for elections same way we can mobilise funds to cater for the welfare of members who have served the party. NDC has a party office and we can do same.

If we have this welfare fund, we can use it for investments that will yield a lot of dividends for us as a party and we can do a lot for the party,” he told party delegates at a meeting.

Prof Ameyaw Akumfi mentioned that apart from the welfare of executives in the party, he revealed three other three reasons for which he is seeking to lead the elephant family which includes unity, discipline and commitment.

“I have three objectives going into this election. The first is the party’s unity. Unity in the party is very important. We all know what happened in 2008.

In 1979 I almost went to Parliament but I was beaten by one vote. I joined the person who beat me and we campaigned to win the seat. We could not form Parliament because there was a split.

2008 after 17 people competed to be elected as flagbearer of the party, we could not unite the party after the elections. 2012 when we decided to unite, we almost won but for a few problems, we would have won and it ended up in court.

2016 when everyone realized that we had been in opposition for long and needed to come back to power, we united and won massively. 169 seats and the President over a million votes. So if there is no unity, we will be severely affected,” he said.

“Secondly, I want to focus on instilling discipline in the political party. In this party, we have rules and regulations.

We have disciplinary committees but we realize that indiscipline sometimes take over In the party. If we have rules and regulations and we don’t make it work it will be a worry.

If members of the party will just wake up and insult party executives then that is a worry.

There are rules and regulations and these laws must work. I will support you 150% when it comes to discipline.”

Another reason why I want to be Chairman is to build a committed NPP. You say you want the NPP so in life and in death you should be for the NPP. We should ask why the commitment in the party has dwindled.

Some people have in the past sacrificed a lot for the party but have got nothing in return. The youth now want things at a faster pace.

So if they do not get anything from the party after staying committed for two terms, they stop being committed to the party. There are some nothing can be done about. I’ve said that the private sector is what will provide jobs.

People who have been committed to the course of the New Patriotic Party (NPP) and have chased MASLOC loans for years but cannot get, meanwhile, others are getting and getting even huge sums, with such people, their commitment will dwindle.

Same can be said about the security services. They will say they’ve given party members slot, they will wait to no avail for the said slots. These things make people have second thoughts about issues. Why will people be committed if they don’t stand to benefit after years of commitment.

He promised to work together with all party members should he be given the nod the lead the NPP as a National Chairman.
He, however reminded the delegates to make the unity in the party a priority as they under take their daily activities because to him, that’s the only recipe to breaking the eight and making history.

Previous “The Frustration Outburst Of Yaw Osafo Marfo, Looking At It Another Angle” Osei Kofi Acquah the National Youth Organizer for the CPP writes
Next “Sir John took care of me financially”, I cannot speak bad of him — NDC Serial caller.