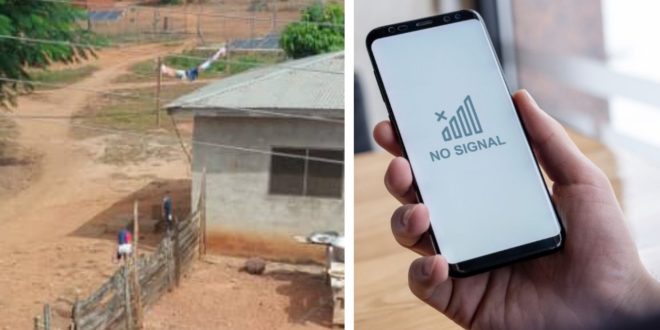 We are facing tremendous network challenges, we need a network mast to promote communications – Residents of the Asantekrom

Residents and Nananom of Asantekrom, a suburb of the Jaman North District of the Bono region have opened up on what they described as their biggest challenge in the community.

Speaking in an exclusive interview with Ark Fm news reporter, Kwaku Mensah Abrampa, some inhabitants in the community revealed that unstable network has been a greatest challenge confronting them which always affect effective communication and Internet connection.

They stressed that the precarious nature of the network has affected them in diverse ways denoting that it has affected their education, business and other aspect of live making it difficult to have their fair share of the digital world therefore government must intervene to find solution to their plea.

The assembly Member for Asantekrom electoral area, Honourable Takyi David lamented on the situation stressing that it has been their core problem which has affected them on several occasions hence they need the intervention of government and other NGOs to lobby for them to acquire a strong network accessibility to enhance communication and promote business in the community.

Meanwhile Ark news in an interaction with the Jaman North Member of Parliament, Honourable Ahenkwaa Yaw Frederick on the situation stated that he is working tirelessly around the clock to ensure an instant installation of network to facilitate effective communication.