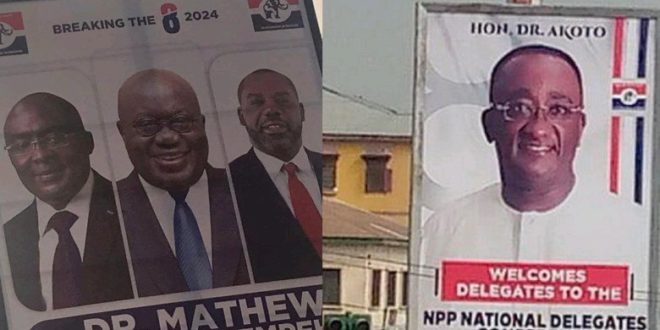 Just a week to their much-anticipated 2021 Annual National Delegates Conference, giants billboards heralding the intentions of New Patriotic Party (NPP) stalwarts for the 2024 flagbearership, national and regional executive positions dot the major streets of the Ashanti Regional Capital, giving the Kumasi skyline a touch of some blue, white and red, at least for the time being.

The stakes are high and the prospective candidates would stop at nothing to put themselves in front of the delegates; the fact that the Vice President, the Minister Food and Agriculture, the Minister for Energy, the Minister for Trade and Industry and other top former and current government appointees, could be caught in the web of party sanctions for campaigning ahead of time is telling enough of the scramble for power within the NPP.

It looks as though the presidential candidate-hopefuls cannot wait to show President Akufo-Addo the exit, to become the new man the job of securing yet another electoral victory for the group who are bent on breaking the 8 years governing cycle since the inception of the Fourth Republic.

In only five days’ time, the party would converge at the Baba Yara Sports Stadium for that all-important national assignment, but whether or not the rules of engagement issued by the National Steering Committee of the party would stand has left a lot of supporters in a dilemma.

“Prior to and during the conference on 18th to 20th December 2021, no billboards and or signboards, banners or any kind of outdoor signage with the images and or names of individual members, with or without the consent of the individuals, shall be acceptable. This applies to the area within the Greater Kumasi Metropolis. All such displays, if put up already, should be removed”, a party statement issued ahead of time reads in part.

There could be stiff sanctions, including “disqualifications in the event nominations are declared opened” for those who would flout this directive, but the Ashanti Regional First Vice Chairman, Kwabena Nsenkyire says he has another way of dealing with the situation.

“I will personally go round and uproot all those billboards if any remain within Kumasi by Tuesday; I’m surprised that they had such huge sums of money to erect giant billboards project themselves and did not do anything to project President Akufo-Addo during the 2020 campaign”, the former Ashanti Regional NADMO Director said on a radio programme on Kumasi-based Wontumi Radio monitored by MyNewsGh.com on Saturday evening.

He accused the Vice President, Dr. Alhaji Mahamudu Bawumia and the other government appointees, Dr Matthew Opoku Prempeh, Mr. Alan Kyeremateng and Dr. Owusu Afriyie Akoto who have mounted billboards at most roundabouts and traffic intersections within the city of sabotaging President Akufo-Addo who still has three years on his mandate as president.

This prediction is only based on the display of paraphernalia and advocacy currently being mounted for them in Kumasi, ahead of the 2021 Annual Delegates Conference.