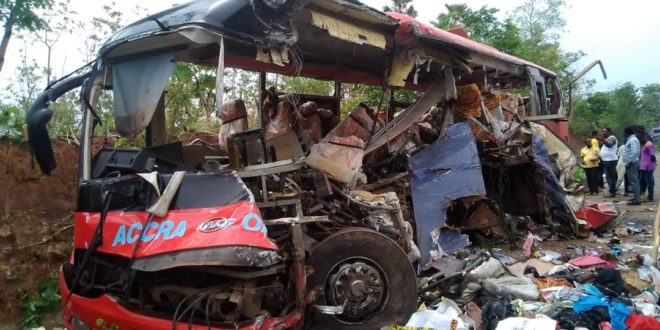 Eight Persons Seriously injured while seven other inured after Toyota Fish Passengers car with the Registration number GR 5861-21 Burst tyre hit a tree at Gomoa Odumase on the Kasoa- Cape Coast Highway in the Central Region.

The driver and some passengers who survived in the accident revealed that, the other passengers are seriously injured and receiving treatment at St Luke’s Catholic Hospital at Apam.

Adolf Ankomah Nuamah says, Eight of the Passengers are seriously injured while others are unconscious.

DO1 Ankomah Nuamah called on drivers to be vigilant while driving to avoid Accident.

Previous Anti-Slavery: 57 Children Have Been Rescued ~ Kofi Annan Hinted
Next Your License Can Be Revoked If You Violate The GES Professional Code Of Conduct ~ Teachers Cautioned