Breaking News
Home / GENERAL NEWS / Ghanaian Man In US Licenses His New Benz As “kwasia” On the Number Plate. CHECK WHAT HAPPENED TO HIM, SEE PHOTOS, 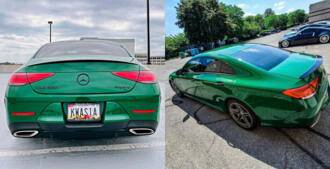 Ghanaian Man In US Licenses His New Benz As “kwasia” On the Number Plate. CHECK WHAT HAPPENED TO HIM, SEE PHOTOS,

@MrAnokye, a Ghanaian man on Twitter who lives in the United States has raised many eyebrows online
The gentleman bought himself a Benz car and decided to name it ‘Kwasia’ which means stupid in Akan
YEN.com.gh has put together some of the interesting comments Ghanaians have shared on Akokye’s rather hilarious development
A gentleman from Ghana identified on Twitter as Anokye with the handle @MrAnokye, relocated to the United States and recently got himself a new Mercedes Benz.

Nobody knows what informed the young man’s decisions but he decided to go completely unconventional with the car by first of all spraying it green.

Anokye, then took this a step further by licensing the car with “Kwasi”, an Akan term that refers to someone being stupid or foolish on the number plate.

“Kwasia” written on number plate by Ghanaian in the US
Ghanaian man in the US buys Licenses his new Benz with ‘Kwasia’ on Number Plate Photo credit: @mranokye
Interestingly, YEN.com.gh found that Anokye had previously indicated in a tweet that he was going to do exactly this and the pictures just show that he kept his promise.

A number of Ghanaians who saw @MrAnokye post on his handle could simply not believe their eyes.

YEN.com.gh went into the comment section and selected some of their comments.

@kwameturnova told Anokye that he is being difficult

Anokye cash man
See the post below
Another Ghanaian who traveled abroad gets comfortable; says he might not come back
As YEN.com.gh also reported, DR Wilson, a high school teacher from Ghana who traveled to Vietnam about three years ago, has caused a stir on Twitter after boldly stating that coming back to Ghana might not happen anytime soon.

The gentleman, popularly known as Achabu, said this in a caption to a photo he shared of himself with a beautiful foreign lady who covered a part of her face.

From all indications, Dr Wilson is sending the signal that life is going on very well for him, which is why he may not find any reason to come back to his motherland