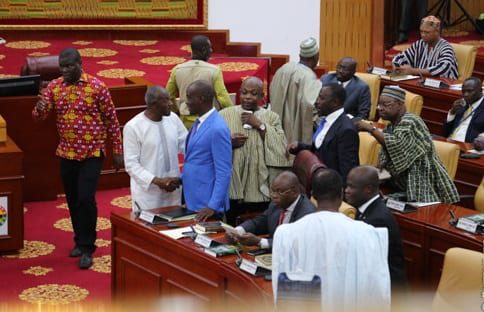 A former New Patriotic Party (NPP) Member of Parliament insists there were reports that the Minority had walked out on Tuesday, March 19 during the consideration of the Electronic Transfer Levy Bill to meet former President John Dramani Mahama.

Frederick Opare Ansah said it goes to reason, therefore, that the members of the Minority were going to come back as they walked out.

It was reason, he further noted, the voice vote was put.

The former Suhum MP insinuated that the Minority has no case going to the Supreme Court to get the passage of the Bill overturned.

He was speaking on TV3/3FM‘s The Keypoints on Saturday, April 2.

Mr Opare Ansah’s appreciation of the issue comes on the back of a suit filed by three members of the Minority at the Court.

The three – Haruna Iddrisu, Mahama Ayariga and Samuel Okudzeto Ablakwa – are contending that there was no quorum in the House when the voting was called on the Bill last Tuesday.

“They know they do not have the evidence but they will go to court, lose the case [and] then continue to deepen a certain perception of the judiciary,” he stated.

But a member of the Minority, George Ricketts-Hagan, who is the Cape Coast South MP, conceding that his colleagues should have stayed in their seats for the votes, said it was strategic and that showed in the call by the Majority Leader to the Speaker to put the question while they were walking out.

“We wanted to see it through voting, it became a tactical game and we were looking at the numbers, so we were sort of monitoring each other, who is not in and who is being carried in ambulance and the [Majority] were also doing that, to look at how they can get one of us to get out.

“The very day the voting was to take place was the day they invited one of our MPs to court. They checked our numbers and we checked theirs and so it was a tactical game.”

The Bill was passed that Tuesday and assented to by President Nana Addo Dankwa Akufo-Addo on Thursday, March 31