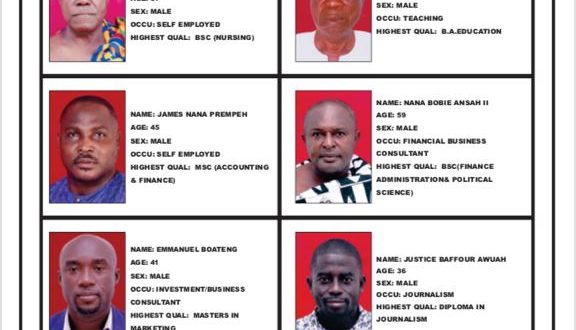 Council of State Elections notice of poll out, 8 contest in Ashanti Region

The Electoral Commission of Ghana has released notice of poll of candidates who have duly nominated to contest the Council of State Elections in the Ashanti Region.

The candidates are eight in numbers including two journalists and three Chiefs, a former Assemblyman, a Teacher and a business consultant according to our research. 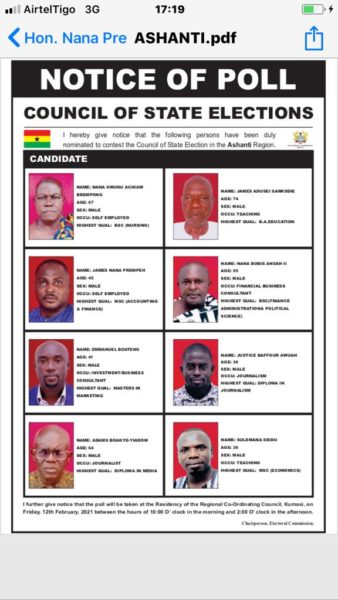 The Chief of Akrofonso, near Agona in the Sekyere South District of Ashanti, Nana Owusu Achiaw Brempong is the current (incumbent) Regional Council of State Member whom five persons are strongly contesting him. He holds Bachelor in Nursing BSC (Nursing), self employed and of 67 years of age.

As to him to be re-elected or different candidate to take the baton from him, time and days will tell. Meanwhile sources say the incumbent performance in the first term was outstanding. He executed his mandates credibly as many of  the populate in the Region are yielding and calling for his second term. “He’s most likely to win the baton for the second time” research reveals.

Council of State elections would be taken off on Friday 12 February, 2021 Nationwide between the hours of 10:00 o’clock in the morning and 2:00 o’clock in the afternoon. In this case for Ashanti Region woud be taken at the Residency of the Regional Coordinating Council, Danyame Kumasi.

Previous Sad news 😥😭: As Teacher admits, confesses for killing his student.
Next Coronavirus: Techiman Traditional Council and NADMO embark on Education on Covid-19 in Churches