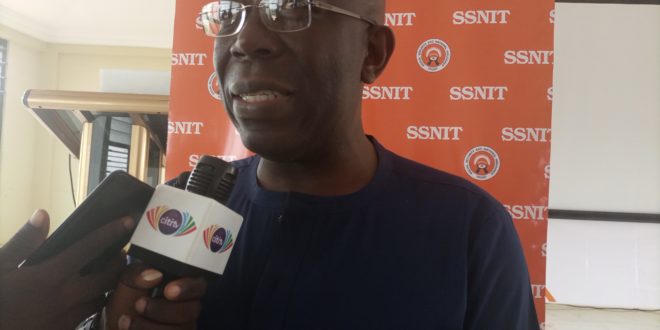 The Director-General of Social Security and National Insurance Trust (SSNIT) Dr. John Ofori-Tenkorang has urged all workers to consider the plight of their retirement and make sufficient investment with ssnit whiles in active work to enable them reap maximum benefits during retirement.

Adding that, currently, 25% of workers on SSNIT scheme pay monthly contributions of Ghc 55 or less, stressing that, if these workers were to retire on basic salaries of Ghc 500 or less, they would earn a monthly pension of Ghc 300.00 as a first pension which would not be sufficient.

Dr. Tenkorang said this whiles the SSNIT engages members of Trade Union Congress (TUC) to brief them about the operations of SSNIT in sunyani, Bono Region.

He however described the scheme as generous arguing that, even though workers contribute 11 % of their basic salaries, the scheme guarantees members up to 60% of the average of the three years.

He recounted that ssnit is in possession of the data of all ssnit contributors and it was not factual that scheme is short changing contributors.

See also  Breaking: Hassan Ayariga regrets for not vaccinated, as battling for life..... God have mercy

He also debunked the notion that ssnit contributors do not live long due to low retirement payments by the scheme.

Previous “Take advantage of this new era technology and learn hard for your future” ~ RM encourages school Pupils .
Next “We must create avenues for employment to reduce irregular migration among the youths” – Immigration Officer