Government through the Afigya Kwabre South District Assembly has cut sod for the construction of a Multi Complex Court Hall and Magistrate’s Bungalow at Kodie in the Ashanti Region, with the assurance that Government would continue to support the Judiciary to operate in peace and justice.

Speaking at the ceremony, the District Chief Executive, Hon Dr Adu-Poku Christian aka APC said Government is committed to providing an enabling environment for the progress of the rule of law.

According to him, the multifaceted Court complex project which is embedded with Chambers, washrooms and office facilities and expected to be completed within 4 months would be a modern structure that would provide a more comfortable premises for lawyers and judges to adjudicate cases.

See also  "He Scammed The Burger, Set Him Up For Police" ~ Honest Herbalist Exposed

Hon APC stated that, President being a Lawyer with good records has cited the existence and practice of a sound judicial system as the basis for the freedom and justice needed for accelerated national growth and development.

In a welcome address, the Chief of Kodie traditional area, Nana Yaw Berimah Peprah II, lauds the President Nana Addo Dankwa Akuffo-Addo for fulfilling his promise to construct a well furnished court at Kodie through the Chief Justice after he came on inspection.

He said, looking at the large size of Afigya Kwabre South District having only one and a very such a small Court Hall was not befitting as attendees are seen mounting on their feet outside waiting for their case.

In attendance were the staffs of the District Assembly, Kodie traditional leaders, staffs of the Magistrate court, Assembly members the clergy and the synergy impex company limited workers. 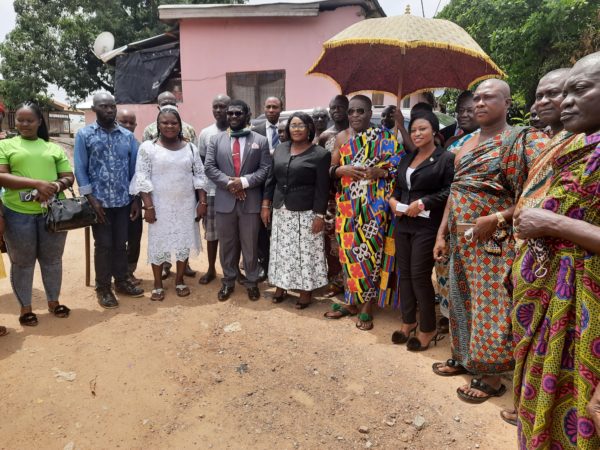 In her remarks, the District Magistrate Her worship Akosua Ataa Nyarko commended the President for listening to their request for the Court complex project.

According to her, place of convenient, the smaller size of the court hall and lack of offices are the major challenges which pose pressure on them and their clients on sound delivery of justice.