A founding member of the New Patriotic Party NPP, Alhaji Digoo has said that the political arrangement and institution of the Dankwa-Dombo-Busia tradition have seen a tremendous election, especially on National Executive positions. All campaigns were been centered on issues basics devoid of tribal, insult and degeneration and soiling of incumbents hard-earned reputation.

All patriots or persons who have taken a keen interest in following various elections conducted in Ghana can attest to the fact that no administration since the 4th Republic has witnessed votes appreciation when seeking for second term elections irrespective of how well such administration performed.

According to the 86 year old patriot, Comparison can be made from Ex-president Kufour’s administration not mentioning of other administration. Several comparisons can also be made even internationally.

It then becomes a wholesale argument for any Patriot who has followed Ghana’s elections over the past years to tagged the incumbent General Secretary Mr. John Boadu as none performing because of votes depreciation in 2020 elections.

The Tafo-Zongo in the Ashanti Region based Baba Digoo disclosed that John Boadu is competent and has shown industriousness and patriotism as a General secretary. His intention and actions are always directed towards the wellbeing of the party because he believes that it is through the New Patriotic Party that can change the phase of Ghana.

Alhaji Digoo in an interview with Kumasi based Hello Fm’s Rexkin Ohene Boateng admonished the faithful delegates of NPP to never fall for their whole say argument but should rather focus and rally behind and maintain Adwenk3se3 John Boadu as he remains paramount in going into 2024 elections.

He also advised the NPPs to never repeat past mistakes to change the current executives both national and regional levels for new ones as it occurred in Tamale.

The second time result-oriented general secretary for the NPP, Mr John Boadu aka adwenk3se3 JB who since assumption of office in 2017 has recruited a total of one hundred and twenty thousand three hundred and thirty-seven (120,337) health professionals is seeking to be reelected the 3rd time to break the eight years jinx in 2024 general elections.

Alhaji Digoo analysing business with politics explained that in every business setting, when a business come new on the market, it’s either break even or make loss, unlike other businesses who are already on the market having goodwill and are making huge profits.

This is because those business already operating on the market are abreast with the market setting and dynamics and have all the field experience and comparative advantages.

“If we all believe and understand that politics is a serious business, wherefore it matches better with the scenario above, then employing new secretary has two side effects, either the party breaks even or make loss in 2024 elections.

Adding that John Boadu is already on the market and knows all the dynamics and strategies to win the 2024 election. He already has the good will and comparative advantages and can also monopolize the market to mass more votes for the party in 2024”

On top of that, if the party also wants to go with a new and relatively inexperienced general secretary, then what signals will the party be sending to the Ghanaian electorates? Who in the NPP will stand up to the Asiedu Nketiah at IPAC meetings, where EXPERIENCE is the rule of the game?

That will be suicidal. It is for this reason that John Boadu is UNABLE to take a break. To break the 8 therefore, the Party needs John Boadu more than he needs the Party. And this is basic political science that everybody can relate to. 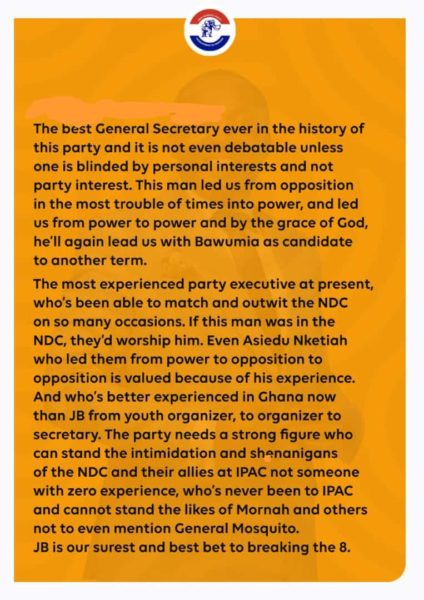 The New Patriotic Party remains the best political party in terms of Ghana’s development not only in the country but in the whole of West Africa. This enviable feat clinched by the Party is a culmination of the commitment and legendary sacrifices of some of the Party’s hardworking Executives such as its current General Secretary, John Boadu, who has spent his entire adult life working selflessly for the NPP.

Alhaji Baba Digoo therefore appealed and also advised the fellow members of the great elephant family, with all humility should not gamble with the future of their party but should maintain the experienced hands, maintain the tried and tested, maintain “adwenkese” John Boadu, to enhance the party’s chances of breaking the 8, to protect the gains of the government in delivering prosperity to Ghanaian People.